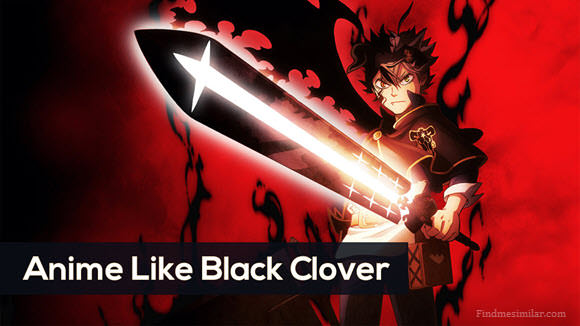 Black Clover is an action adventure Shonen that follows Asta and Yuno two friends grown in an orphan and both aiming to become Wizard King a title given to the strongest Mage in the kingdom. However Asta does not possess any magic at all in a place where magic is every thing where as Yuno is blessed with abundant magic and amazing control.

The Anime has all the themes that are needed for a popular Shonen such as heavy action, adventure, friendships, rivalries, underdog hero, super powers, magic, comedy, you name it and you’ll have it here. If you enjoyed the Black Clover series then this list of similar anime like Black Clover is for you.

These recommendations are based on my personal opinion and if you feel that there is any anime similar to Black Clover that we might have missed please make sure to mention them in the comments below so that we may update our list.

Naruto is an popular Shonen anime series that follows an young mischievous ninja who wants to become the Hokage the head of leaf village and the strongest ninja.

Both Naruto and Black clover has a lot of similarities such as an both are underdogs with an humongous goal of becoming the head of their village/kingdom. Both are popular Shonen with heavy action, friendship and rivalries.

The story follows the Seven Deadly Sins, the fearsome knights who are banished by the Holy Knights on accusation of attempting to overthrow the Liones Kingdom.

Ten years later the Holy Knights stage a coup capturing the Kingdom and young princess sets on on journey to meet the legendary Seven Deadly Sins and take their help to reclaim her kingdom.

In a world where 80% of people are born with unique superpowers called “Quirks”, My Hero Academia follows the young Izuku Midoriya who’s aim is to become a superhero. His dream is shattered when he learns he is quirkless and cannot become a superhero.

However his fate meets him with his idol and the strongest superhero “All Might” and gets his powers under strange circumstances. Black Clover and My Hero Academia has a lot of similarities like both the main character are born without the magic/quirks that are needed to achieve their goal in their respective worlds.

Both anime strongly emphases on superpowers, friendships, adventures and rivalries making Boku No Hero Akademia a must watch if you love Black Clover.

Ao no Exorcist follows Rin Okumura an ordinary troublesome teenager raised in Church by Father Shiro Fujimoto, a famous exorcist. One day Rin learns that he was the son of Satan.

Fairy Tail follows four young wizards Natsu, Lucy, Gray and Erza who sets out on adventure across the Kingdom taking up different missions on behalf of their (in)Famous Guild Fairy Tail.

Like Black Clover the world of Fairy Tail too is filled with Magic and adventure where the main leads become more powerful with each mission.