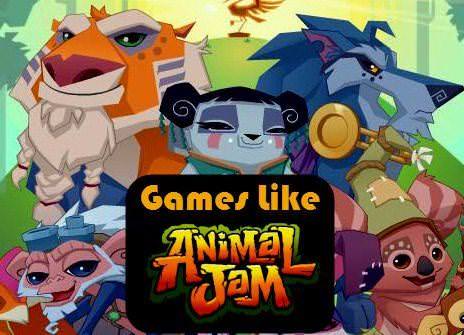 Animal Jam is an MMO Virtual world for kids who love animals. The game was launched by Smart Bomb Interactive in partnership with the National Geographic Society. Here you can create your own animal, buy accessories and clothes for it, customize your den, learn about the natural world outside while meeting new friends and playing with them. If you are looking for more games like Animal Jam where you can learn, explore and have fun then check the below list of similar games. Don’t forget to mention if we miss any games as we keep on updating this list.

Club Penguin is a popular MMO (massively multiplayer online) virtual world game by New Horizon Interactive. The game is set in a snow filled world where you can play as cartoon penguin-avatars.

Wolf Quest is a 3D wildlife simulation game that lets the players living out the lives of wolves roaming across Yellowstone National Park and learning their behavior and ecology. It is a single-player game that’s split into 2 episodes.

Webkinz is an virtual world game for boys and girls where their adorable stuffed toy comes to life. Here the players can adopt a pet, name it, play with it, build a home and decorate it with different accessories from online store by spending KinzCash (Webkinz currency). KinzCash can be earned by answering quizzes, playing games and competing in tournaments.

FeralHeart is a free-roaming 3D adventure RPG game where the players play as a lion or a wolf. The players can creating a character, customize it, explore the world, hunt prey, and chat with other members.

Fantage is a virtual world for children where they can play, socialize, and learn in a safe and exciting online environment! Users can explore the world with their own personal avatar, which they can customize by choosing distinctive features, hairstyles, and clothing.

Marapets,…if you can think of more similar games then don’t forget to mention them in comments.