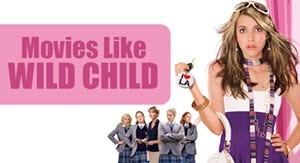 Wild Child is a teen romantic comedy movie starring Emma Roberts, Alex Pettyfer and Natasha Richardson. The movie is about a spoiled teenager Poppy Moore (Emma Roberts) whose over the top prank pushes her father to send her to an strict English boarding school to straighten her out.

If you like teen romantic comedy movies like Wild Child then find the recommendations for it below and don’t forget to mention if we miss any as we keep on updating this list.

The Clique (2008) is a based on the popular teen novel series of the same title by Lisi Harrison. The story is about Claire who clearly not top Clique (aka the Pretty Committee) material moved from Orlando, Florida into Massie’s guest house and is not accepted into the exclusive club. But with a little luck, Claire might just stand a chance.

St Trinian’s, the infamous school for ‘young ladies’, is facing financial ruin. The girls using their wit and ingenuity, do their hilarious worst to save the school from bankruptcy.

Material Girls is a teen comedy film directed by Martha Coolidge. The plot centers around two wealthy sisters Tanzie and Ava (Hilary and Haylie Duff) who looses everything when a product scandal strip them of their wealth.

Angus, Thongs and Perfect Snogging is a 2008 teen comedy directed by Gurinder Chadha. The story is about a fourteen year-old Georgias ups and downs of being a teenager, including nabbing the boyfriend of her dreams and having the best fifteenth birthday party ever.

Mean Girls is a teen comedy movie directed by Mark Waters. The story is about Cady Heron (Lindsay Lohan) a 15 year old home-schooled daughter of zoologist parents attending a public school for the first time and her clash with the school’s most exclusive clique, the Plastics.

More Movies To Watch If You Loved Wild Child: