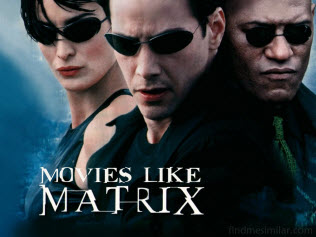 The Matrix is a 1999 science fiction action film directed by The Wachowski Brothers. Set in dystopian future the movie follows Neo (Keanu Reeves), a computer hacker who joins a rebellion against the machines after knowing that his everyday world is the product of a computer-driven digital matrix created by sentient machines. If you are a fan of science fiction movies like The Matrix and looking for movies similar to it then find the recommendations for it below. Obviously, it goes without saying that the closest movies like The Matrix are the sequels, so those are not included in the list see them if you haven’t already and don’t forget to mention if we miss any similar movie like Matrix as we keep on updating this list.

Movies Similar to The Matrix

Equilibrium is a 2002 science fiction action thriller film written and directed by Kurt Wimmer. The movie is set in fictional future world where all forms of emotions are  suppressed and concidered illegal. when John Preston (Christian Bale) the elite enforcement officer begins to experience emotions he aids a resistance movement against the very regime he used to serve.

Inception is a 2010 science fiction action-thriller film written, co-produced, and directed by Christopher Nolan. Leonardo DiCaprio plays Dom Cobb, an extractor who performs illegal corporate espionage by infiltrating the subconscious of his targets to extract valuable information. He is approached by the wealthy Mr. Saito (Ken Watanabe) to performing the act of inception, to implant an idea into his target’s subconscious.

Dark City is a 1998 science fiction film directed by Alex Proyas. The film follows John Murdoch (Rufus Sewell), a man suffering from amnesia find out he is wanted for brutal murders that he doesn’t remember. He seeks to unravel the riddle of his identity while on the run from the police and a mysterious group with telekinetic powers known only as the “Strangers”.

Total Recall is a 1990 science fiction action film directed by Paul Verhoeven. the movie is an adaptation of the Philip K. Dick short story “We Can Remember It for You Wholesale”. The story is set on Mars in 2084 where Arnold Schwarzenegger plays the character of Douglas Quaid, an Earthbound construction worker who discovers that his entire reality has been invented.

The Animatrix is a groundbreaking collection of nine short films from the creators of The Matrix trilogy directed by seven leading anime directors. The movies details the backstory of the “Matrix” universe, and the reason for creating it.