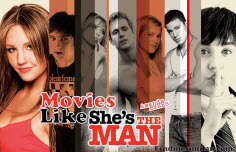 She’s the Man is a 2006 American romantic comedy directed by Andy Fickman where Viola (Amanda Bynes) takes the identity of his brother as he goes to London for a couple of weeks, but what she doesn’t know is that she’s going to fall in love with Duke (Channing Tatum) her soccer teammates.

If you like to watch more romantic comedy movies like She’s the Man then find the recommendations for it below and don’t forget to mention if we miss any as we keep on updating this list.

Just One of the Guys is a 1985 comedy film directed by Lisa Gottlieb. To prove that a beautiful women can also be intelligent Terry (Joyce Hyser) disguises herself as a boy at a rival school to participate in the schools writing contest but everything doesn’t go accordingly for her.

Carrie, Heather, and Beth the three ex-girlfriends of John Tucker (Jesse Metcalfe) wants to teach him a lesson as they use Kate (Brittany Snow) to break his heart and know the pain he caused them.

Mean Girls is a teen comedy movie directed by Mark Waters. The story is about Cady (Lindsay Lohan) a 16 year old home-schooled daughter of zoologist parents attending a public school for the first time and her clash with the school’s most exclusive clique, the Plastics.

Sydney White is a 2007 teen comedy that is modern version of Snow White and the Seven Dwarfs where Sydney White (Amanda Bynes) along with seven misfit geeks fights to takeover of the student government.

Haley (Missy Peregrym) is a rebellious teen given an unusual sentence by a judge to enroll in an elite gymnastics academy run by Burt Vickerman (Jeff Bridges) who is known to be extremely strict.