‘On The Rebound’ Brings Facebook Stalking To A Whole New...

by Dusten Carlson 9 years ago4 weeks ago

A new Facebook app called “On The Rebound” brings Facebook stalking to a whole new level. Sounds creepy, but that’s sort of the point, according to its creators. Interestingly, the app is a lot more harmless than it sounds. It only sin is providing a shortcut for something everyone does anyway.

It seems like it’s becoming fashionable to hate on romance/dating apps (we all remember Bang With Friends). Startups need an “angle” to set themselves apart from the competition, but some romance/dating apps have earned a lot of controversy for perceived privacy violations, misogyny, or plain old-fashioned creep factor.

On The Rebound is no different. Since debuting a little over a week ago, the app has drawn a mixed response. AllFacebook and America Noticias like it. Some publications, like Buzzfeed and DigitalTrends well, not as much.

We recently spoke with Anthony Coombs, who co-created the app with Jon Tran and site designer Taylor Lecroy, about the controversy surrounding On The Rebound to get a more complete understanding of the app, and to answer some of its critics. Does it violate Facebook user privacy? Is it misogynistic? Does it offer an unprecedented level of Facebook stalking?

Social News Daily: Tell me about On The Rebound. What it is, and what it does.

Anthony Coombs: “We built a program that goes through all your friends’ entire Facebook feed history (past 6 years) and finds all of their relationship status changes. We then plot the info and give you all of important need to know information. Say you meet someone and you’re interested, man or woman, doesn’t matter. The first thing you do after friending them is to check their relationship status. But it’s not just enough to know they’re single. It helps to know their history as well.”

Coombs: “We knew going in that it would be somewhat controversial and that’s fine.”

SND: How did On The Rebound come to be?

Coombs: “We first conceived of On The Rebound after I had an unfortunate situation where I was interested in girl who had been involved in a long term relationship. I was the one who she confided in about the troubles in the relationship. So when the boyfriend finally broke up with her I specifically did not make a move thinking that it would be uncool to try to get her when I knew she was in a vulnerable state. But wouldn’t you know that in that short period of time after the breakup she hooked up with a friend (mutual acquaintance really) of mine and they’ve been together ever since. I told the story to a friend and he thought that it would be interesting if you could use data from past behaviors to predict future ones. Basically, use whatever relationship data that was available and predict when a person would most likely be ‘on the rebound’ or ‘ready for a hookup’ or ‘ready for a new relationship.’ We started working on it that night. So the whole idea started AFTER I didn’t do what the app suggests.”

SND: How did you decide on the data you collect, and how does it translate to the user?

Coombs: “We actually spent three months researching and interviewing relationship experts from across the country and Canada to get an understanding as to how age, gender, sexual preference, timing in relationships, and duration of past relationships affect a person’s willingness or timing to enter into a new relationship.

“The 200 responses are equally fun, dismissive, arrogant, helpful, derogatory, and controversial for both women AND men. It would be fair to call us chauvinistic pigs if we skewed data or advice for just one and not the other but that is simply not the case. Here’s a screenshot result for a friend of mine:

Coombs: “Here’s a 33-year-old guy who has been in 2 relationships in the past 5 months. Read the advice. That’s pretty accurate. Why would any person go after a guy who is just jumping around? The time for fun and games should have been over for this guy. Of course we don’t know the whole situation (we can only get what we can from the data) but chances are he’s not ready to settle down.

“So (depending on how much data we can get) we use predictive analysis based on a person’s previous relationship status data (nothing less than what you will be able to do with Graph Search) to somewhat accurately predict when a person will be ready to enter into a new relationship or just hook up. On the one had this is intended to be a fun site to play with, but technologically it’s pretty cool. We created a clever little way to extract data long since thought gone and use it in a way no one ever thought. This can be considered both good/bad – interesting/creepy. That’s fine to spur debate.” 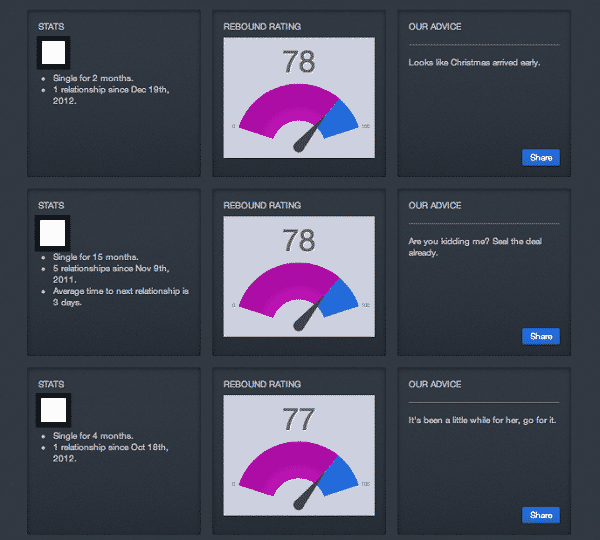 SND: Let’s talk about the negative response you’ve gotten so far. DigitalTrends calls On The Rebound’s language toward women “sexist and mean-spirited” while BuzzFeed opined that the same language could be taken as “predatory” and “opportunistic.” How do you respond to those charges?

Coombs: “We don’t mind it being controversial from a tech standpoint (yeah, it’s a little creepy). But it’s not sexist. It’s equal opportunity bashing for men and women. In fact, the majority of the advice to women is telling them NOT to date someone because they’ll only take advantage of you. How is that in any way sexist?”

SND: So you don’t think that On The Rebound is sexist or misogynistic.

Coombs: “To me it’s all in good fun. We don’t mind controversy, don’t mind it being called creepy. Hell, I think it’s definitely creepy. Who thinks of this sort of thing? But I think that anyone who calls it sexist is misinformed. For example here are a couple of points from the advice section, ‘He’s a douchebag, stay away.’ ‘Do you really want to be with a guy like this?’ ‘He’s using you, use him back!’ If anything we’re way more harsh on the guys than the girls. So bottom line, call it what you want, but sexist isn’t one that I think is justified here.” 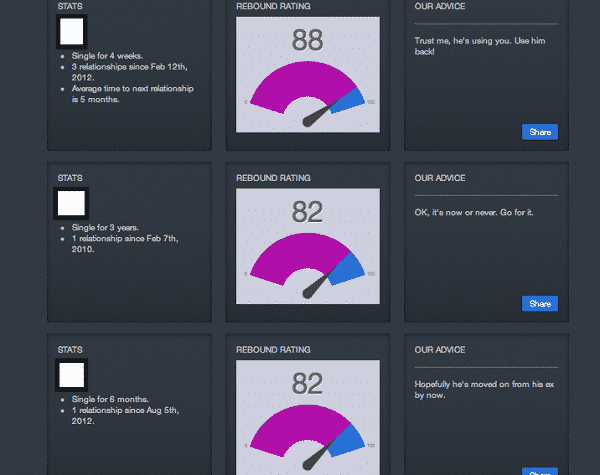 SND: What about user response? What do they think of it?

Coombs: “User response has been mostly positive… most people see it as fun. Haven’t gotten one email angry about it. In fact, if you read the Buzzfeed article the responses section has a couple of people defending the app.”

SND: You said you did some research on this before you created it.

Since debut, On The Rebound boasts roughly 1,000 users. Coombs told me that they’ve had more visitors, but some people are scared of giving away their Facebook data, which he said he understands.

So what’s our take? Is On The Rebound creepy? Yeah, probably. But bawdy Bang With Friends, it isn’t. It doesn’t violate your privacy, because it doesn’t have access to people who aren’t your friends. All of the information it curates is available to anyone with time, patience, and interest.

As for the allegations of sexism and misogyny, that might be a bit of a stretch for our tastes. It seems as though On The Rebound asks its users to bring with them a prerequisite amount of self-deprecation and self-awareness to the Facebook stalking game. Their only sin by our measure is perhaps not making that entirely clear from the get-go, but with user approval in equal measure from both genders, it seems as though most people get the joke.

But as always, you’re free to decide for yourself. You can check out On The Rebound here, just bounce back this way and let us know what you think.