London, UK – Over 200 people attended a British Marine’s funeral Thursday. Fearing the veteran would be buried without anyone to mourn him, a clergyman put out a plea on Facebook that drew hundreds of complete strangers.

James McConnell, who served in the UK’s Royal Marines, died last month at the age of 70, reports NBC.

The staff at his nursing home in Southsea, Hampshire, planned on being the only people present at his funeral, as he did not have any close family. After hearing this, Reverend Bob Mason posted a message on Facebook and contacted the Royal Marines Association.

Here’s the message which, as you can see, was shared and reposted by members of the association and thousands of others on Facebook. 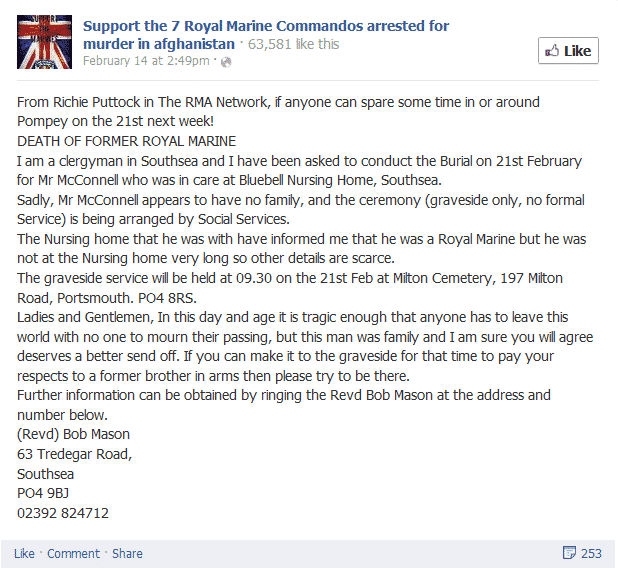 Hundreds responded to the message and attended the Thursday ceremony at Milton Cemetery in nearby Portsmouth.

Mason sent all of the attendees a big thank you after the ceremony. Speaking to the local paper The News, he said:

“I want to say a big thank you to all of those who turned up. Many people had concerns about him being buried with no family present but now they have seen him have a dignified burial.”

In attendance was 88-year-old Arthur Bailey, a former soldier who served in several conflicts.

“I heard about it and just wanted to come along,” he said. “This is what the armed forces family is for. It’s a credit to everyone who turned up.”