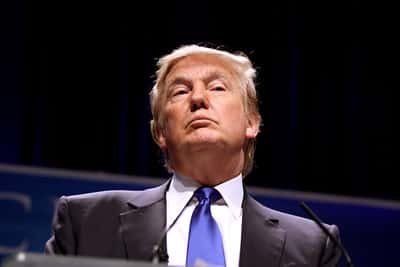 Former President Donald Trump is in the limelight again for something that a lot of American’s think is “over the edge”. Are we surprised that he went viral? Actually, no. We are all pretty sure that it is just a matter of time before Trump becomes viral again on the internet like he always was. After he was banned from social media sites like Facebook and Twitter this year, it has been months since we last heard from the guy. What is the reason this time, you ask? A Christmas Card allegedly posted by Trump himself, greeting everyone a Merry Christmas from the Winter White House.

There are a lot of reasons why this post went viral. The first of these was the editing which, honestly, was of truly poor taste. Trump looked like the Christmas Grinch scowling over the holidays. The background made it even more hideous – an oddly placed sleigh, a manger, and five unusual Christmas ball ornaments. This, among others, point to the direction that the image is fake. Regardless, it was successful in putting Trump back on the internet’s map.

Whether it is fake, or this was purely intentional, Twitter still went wild over his “Winter White House” Christmas card. Here are some of the best reactions:

No Barron, no Melania, just Donald

If I was Barron, I wouldn’t want to be on that monstrosity of a Christmas card from the “Winter White House” either. pic.twitter.com/vN47aAPXAt

Where is the Winter White House anyway?

What the heck is a Winter White House. Is he serious?

Who would you rather have back?

President Obama is handing out Christmas presents to children with cancer. Trump is sending out Christmas cards from the “Winter White House” and admitting to obstruction of justice on national TV. Who would you rather have back?

Well, it’s not the Winter White House. You have be President of the United States to be able to say that, and 81 million voters ended that conversation a long time ago.

Does he think he is still President?

There is no “Winter White House”. There never was.
The twice-impeached, FORMER president still thinks he’s president. 🤮 https://t.co/Y2W9D23PHY

I did my own research, and this Trump Winter White House greeting is real and glorious. pic.twitter.com/AhxzYgKJL7