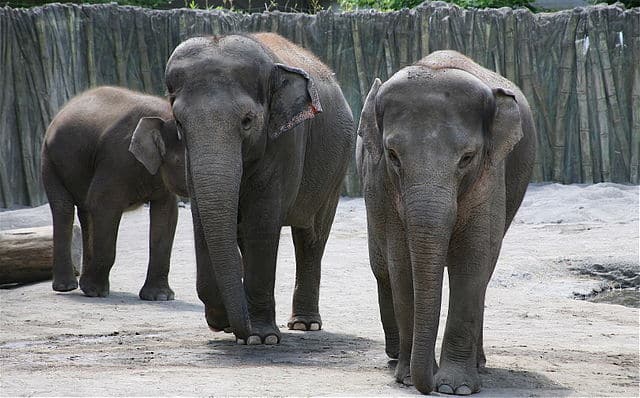 A popular traditional event, the ‘Squishing of the Squash’ is an awaited celebration in the Oregon zoo. The popular event has been celebrated annually at the Oregon zoo for 23 consecutive years as an enrichment activity for the zoo’s animals. The most awaited show of all – elephants smashing gigantic pumpkins.

The event started way back in 1999. At the time, a prize-winning pumpkin weighing a whopping 828 pounds was donated to the elephant herd of the Oregon zoo. Since then, it has become a stimulating activity for zoo animals and has been held annually. Not only is the smashing activity enjoyable for the elephants, the sweet bits of pumpkin are surely an enjoyable treat for them.

As a form of contribution, farmers all around the state donate their overstock pumpkins for the Oregon zoo animals to help with its enrichment programs. Since pumpkins are an icon for Halloween, the annual smashing of pumpkins has become a prelude to Halloween festivities at the zoo. Usually, the event is held on the second week of October giving enough time for the zoo to celebrate Halloween.

How do the elephants do it?

Just in its trunk alone, an elephant has about 100,000 muscles. So, a huge and rock-hard pumpkin will break like a tomato under the weight and pressure of an elephant’s trunk. On top of that, lots of elephants enjoy stepping on the orange vegetables too. An elephant’s weight is SURELY enough to squash down even a gigantic pumpkin.

An African elephant has about 100,000 muscles in its trunk, making it the perfect tool for pumpkin squashing. Meet more animals going wild for pumpkins here:https://t.co/9hZ0mC3weC pic.twitter.com/WrYU9CVV0J

What better way to enjoy National Pumpkin Day than to watch gigantic pumpkins get smashed by humongous mammals like an elephant, right? Seriously though, watching an elephant smash down huge pumpkins is awe-inspiring. Seeing the majestic beasts use their tusks, heads, and feet in smashing pumpkins is quite enjoyable. The sound is an absolute winner for ASMR, too.

Get an elephant next time you make pumpkin soup. pic.twitter.com/201vmE8IkY

Yes, even small animals get their share of the pumpkin treats

Although the elephant smash is a favorite, all other groups of animals get their share of the pumpkins too. Small animals enjoy small pumpkins, too.

It’s October & that means pumpkin spice szn is here. Even the Oregon Zoo is getting in on the trend, sharing a video of elephants, beavers, porcupines, and more enjoying some pumpkin treats. 🎃 pic.twitter.com/SvueiDakgU

Also, read TikTok Famous Products You Could Check Out for Black Friday Sale 2021