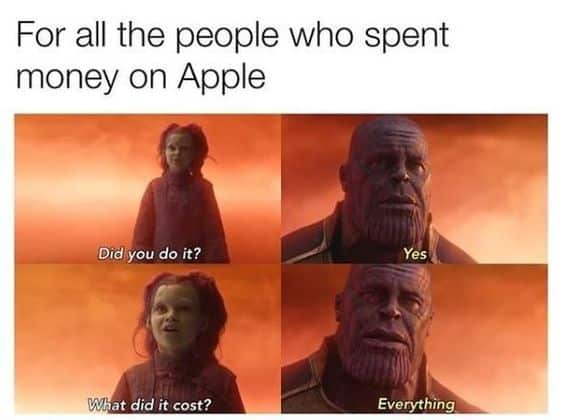 The latest Apple Event finished in just 7 incredible minutes – all the updates and their newest products. We are all looking at touch bars, polishing cloths, an ugly notch, an HDMI port, and, finally, an SD card slot. In an interesting turn of events, trusted websites all over the internet have commented how this is probably the #Worst #AppleEvent #Ever. Mashable claims that the tech giant “became a parody of itself”. The Verge also commented on how the company finally fixed issues that they themselves created in the first place.

As per usual, people were excited about what the tech giant announced. And, reactions from fans gave birth to hilarious memes all over the internet. Most of the memes focus on what they need to sell just to afford all the latest Apple Gadgets. We may all be laughing at these funny meme reactions right now. However, deep inside, we all know that these are true. LOL.

In this #AppleEvent, the tech giant announced their latest products which include MacBook Pro 2021, AirPods 3, M1 Pro, and more.

Here are some of the most hilarious memes about the latest Apple Event:

Waiting for the Apple Event after looking at my bank account. #AppleEvent pic.twitter.com/NeMYRjhFEu

We all gained fat during the lockdown… Even Apple MacBook Pro…#AppleEvent #Apple #MacBookPro pic.twitter.com/kVuJRpVkxE

Are we the only ones thinking this?

How about you, what are you selling?