Keeping The Faith: PlusGrace Pairs Social Media With The Power...

by Dusten Carlson 10 years ago9 months ago

A new startup called PlusGrace brings people of faith together online. The web platform allows religious individuals and organizations to create, discover, pray for and support faith-based campaigns and initiatives.

PlusGrace is a New Hampshire-based startup created by brothers Jamie and Adam Coughlin. Founded on November2, 2012 (All Souls Day), PlusGrace is the result of the tech-minded Coughlin brothers’ desire to answer what they see as a lack of innovation in religious circles.

“Hundreds of millions of people are living their lives online,” said Jamie Coughlin. “People of faith must find a way to reach them or risk losing a generation of believers. PlusGrace blends the power of prayer with the connectivity of the web.”

PlusGrace is more or less a social hub for people of faith, but also doubles as a service for social good for religious folk. Using the site, users can create campaigns: Specifically, prayer and fundraising campaigns or prayer only campaigns.

“We put so much emphasis on prayer because we want people to know that one prayer is as valuable as one dollar,” said Adam Coughlin. “That is a powerful statement because it means, even if you don’t have any money, you always have something to give. There is great value in prayer.”

For example: One of PlusGrace’s current (and very timely) campaigns involves Pope Benedict XVI’s recent retirement announcement. The campaign is titled “Pray For Pope Benedict For The Future Of The Church,” and invites anyone with Internet access to pray for Benedict’s health and for the Conclave of Cardinals who are tasked with picking a new Pope.

Sure, we give Pope Benny a hard time around here, but his retirement is definitely on the minds of the 1.18 billion Catholics around the world right now. That’s a lot of potential prayers. And potential members of Plus Grace.

The Coughlin brothers also see Pope Benedict’s status as the “first tweeting Pope” as evidence of the importance of using technology as a tool to spread faith.

PlusGrace has all the trappings of a Judeo-Christian social service, which I raised as a point of potential concern with Jamie Coughlin. He told me that the service isn’t exclusive, and is open to “anyone who believes in the power of prayer” and hopes that its design make it more “inviting than anything else.”

When I asked about future campaigns run, whether prayer only or fundraising based, Jamie said that as long as PlusGrace continues to grow, social good will become an increasing focus. 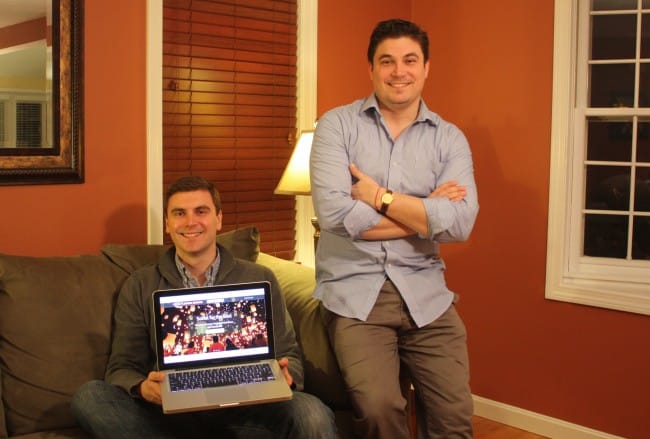 “The basis of PlusGrace is to first allow users, as well as PlusGrace to respond to the world in a positive, impactful way through prayer,” he said. “This means creating campaigns around the everyday events, both locally and globally.

There are still plenty of questions about PlusGrace (at the front of the pack is whether it will take off with religious folk at all) but there’s definitely a substantial market out there to fill the Coughlin brothers’ vision. Religious observers are hardly the minority in our increasingly social world, so the question becomes how PlusGrace plans to engage with them.

The most valuable card in the Coughlin deck pertaining to this concern is that both of them have a lot of tech experience. Unlike most religious institutions which, like Pope Benedict, try to engage with social media from the outside-in, the Coughlins just might be able to build a viable social service with PlusGrace from the inside-out.

If you want to check out PlusGrace for yourself, you can do so here. But let us know what you think of this faith-based social initiative. Is there a market for it? Can it take off? What questions do you have about it?