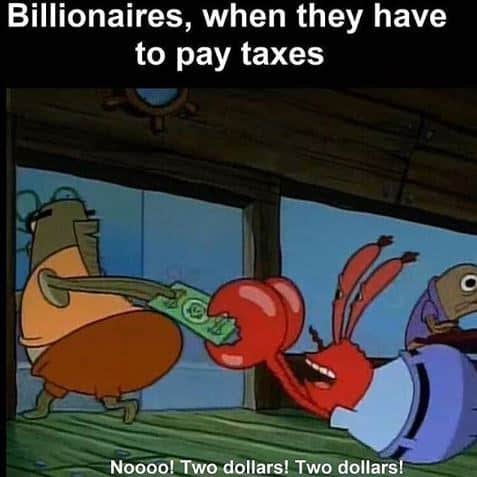 Every person in America that has a business or is employed is required to pay a portion of their income to the IRS. This is called federal income tax. Even employees earning minimum wage have a certain rate they need to pay, as long as they have income. Since the explosive news from a website called ProPublica, Americans are now aware that the country’s wealthiest have found loopholes in the law that allow them to avoid income taxes. We may remember a similar conversation last year when Americans found out that Former President Trump paid only about $750 in Federal income taxes. This year, all eyes are on American billionaires since they pay almost zero federal income taxes.

Here’s what the internet has to say about that:

We must tax the rich

You probably pay a higher income tax rate than Buffett, Bezos, or Bloomberg: some of the wealthiest billionaires in the country.

I’ve said it once and I’ll say it again — we must tax the rich. pic.twitter.com/za4OpQV89r

We may all pay higher federal income taxes than billionaires

I’m not a billionaire, or even a millionaire.

So why do I pay more income tax than they do?

If billionaires paying nothing in federal income taxes doesn’t convince you our system is broken, I don’t know what will.

Loopholes does not make it fair

Our tax code is littered with loopholes. They’re so big that Jeff Bezos could drive an Amazon truck or fly a rocket ship through them. Let’s raise opportunity for everyone in America by making billionaires and giant corporations pay their fair share.https://t.co/BzB8zdsXdP

Reminder: As billionaires and corporations get away with paying zero federal income taxes, the IRS is increasingly auditing low-income Americans.

Billionaires only take earnings on their wealth when it suits them

Maybe I’m slow on the uptake, but this new ProPublica story on billionaires & taxes is the first time I understood the key reason very rich people pay so little income tax is because they have largely defined away “income” – they take earnings on wealth whenever it suits them.

A bit hard to understand but it’s a smart move

I find it astounding that the primary means of tax evasion used by US billionaires is debt. Income is obviously taxed, and capital gains tax comes into play if they sell of some of their assets. Instead they use these vast assets as collateral for extremely low interest loans.

Also read: Events in the US You Shouldn’t Miss For Father’s Day