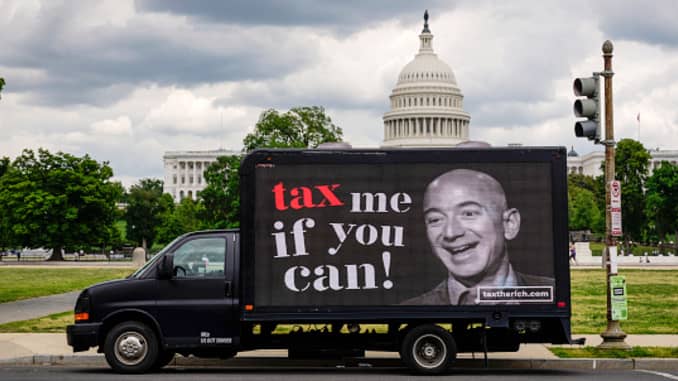 The Patriotic Millionaires claims real millionaires make up their organization. With a motto of “As a millionaire, tax me more,” the Patriotic Millionaires websites claim they call for all members to have a yearly income of $1 million at least, or a net worth of $5 million or more. Holding a megaphone, Danielle Brookner (Bezos tax protest attendee) is a New York State Senate Democrat candidate; she pointed out how much cash Bezos had made during the COVID-19 pandemic, and how folks in the metropolis were stranded without satisfactory relief.

“He doesn’t pay taxes. He needs to stop trying to buy us and take our tax money and pay the tax money to people who are marginalized and suffering during the pandemic and before the pandemic,” said Brookner. The wealthy protest group paid to have billboards rode around Washington DC and NYC (presumptively because the price tag wasn’t a problem), with slogans like: “Tax Me If You Can” aside from an image of Bezos and “Cut the Bullsh*t. Tax the Rich.”

While Amazon and Bezos have raked in billions of dollars during the breakout, many of his employees have lost their homes and basic quality of life,” the group wrote on their site, while listing also all the pitstops they planned to make at destinations like Wall Street and Trump Tower. “Amazon relies on our country’s physical infrastructure and education system, yet has expressed no willingness to pay its fair share to keep our country and our economy running smoothly.”