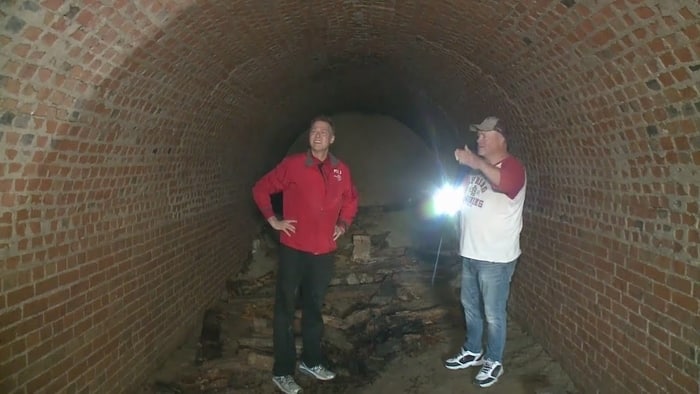 Homeowner Gary Machens unearthed a 9-foot underground tunnel when he observed his sidewalk beginning to slope.

Machens stated: “A lot of brick. Whatever they built this for, it took a lot of men and a lot of hours. You know, one guy didn’t do this.” He went on: “Had a problem here at the sidewalk and as we were doing some excavating and repacking of the rock here, we discovered this tunnel here,” he said. “According to historians here in the Alton area. This tunnel was put in here around 1840.”

When the farmer from West Alton and his bride first moved into the abode, he was familiar with its history already – dating back to the 19-century (1890s approx). Machens thinks the shift in ascent from 1895 when the brick-paved street was laid down cloaked the opening to this belowground enigma. Machens added: “Why is it stair-stepped like this? Why is that in there? Do you see the offset in the brick? And if you look along this wall it turns that way a little bit. Look down along this wall.

Man Digs Underground Tunnel To Spy On Ex-Girlfriend, Gets Stuck In It

Israel’s Iron Dome has protected the country against missile attacks for years. The Iron Dome in Israel is the biggest of its kind in the world. No other countries in the world use the same air defense system, meaning it is one of a kind. The tension between Israel and Gaza has been going on… END_OF_DOCUMENT_TOKEN_TO_BE_REPLACED

The world is devastated by the news that Britain’s Prince Philip, the Duke of Edinburgh, has died at the age of 99. Palace media confirms that the Duke has expired mid-day today, April 9th. The announcement did not contain any specifics on the cause of death. The United Kingdom will enter a state of national… END_OF_DOCUMENT_TOKEN_TO_BE_REPLACED

Who would have known that religious prophets would be among the most loyal supporters of former President Trump? In fact, it has been observed that the most conservative Christians may have been the right amount of push for Trump’s presidential win back in 2016. Since Trump’s election back in 2016, numerous self-proclaimed “prophets” have been… END_OF_DOCUMENT_TOKEN_TO_BE_REPLACED