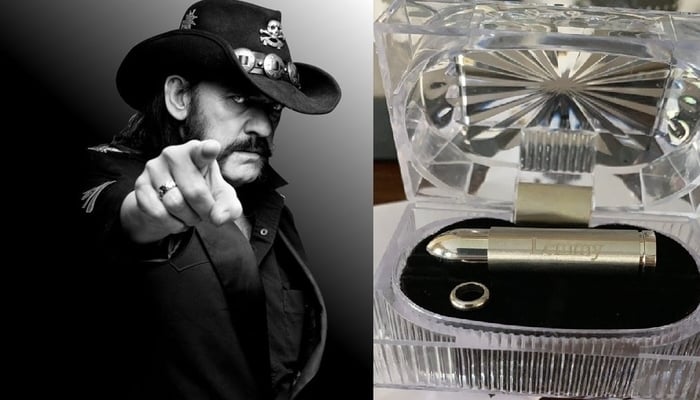 After he passed away, Lemmy, rock ‘n’ roll icon, had his ashes affixed into bullet casings, which were conferred later to his dearest friends.

Given that “kickass” and “Lemmy”  go hand in hand, the news should really come as no shock with the bullets supplying us with a reminder that the bass guitar giant was all-the-way-through rock ‘n’ roll right up until his light extinguished. The onetime host of MTV show Headbangers Ball, Riki Rachtman, hopped on Twitter to deliver the news, posting an image of his personalized silver engraved “Lemmy” bullet that he got from the late Motörhead star.

“Before his death #Lemmy asked for his ashes to be put in some bullets & handed out to his closest friends. Today I received a bullet & was literally brought to tears,” Rachtman wrote of the piece. On Instagram in 2020, retired pro tennis player Pat Cash shared another photo of an engraved bullet, which had been gifted to Whitefield Crane, singer in the band Ugly Kid Joe. Cash’s post reads: “#Lemmy (RIP) from #Motorhead asked that his ashes be put in some bullet and given out to his closest friends, last night one was presented to my mate Whitefield Crane.”

A heartfelt letter that came with the bullet read: “We all know Lemmy knew many people but had few that he considered friends and even fewer that he considered family. Being that you are one of those people he considered family, we would like to share a little piece of him with you. Lemmy touched all of our lives in a way we don’t think any of us could forget, but with these ashes you know… you keep Lemmy with you forever. He was Lemmy. He played Rock ‘n’ Roll. Don’t forget him.”

Substitute Teacher Fired Had Bullets Fall Out Of His Pockets

The world is devastated by the news that Britain’s Prince Philip, the Duke of Edinburgh, has died at the age of 99. Palace media confirms that the Duke has expired mid-day today, April 9th. The announcement did not contain any specifics on the cause of death. The United Kingdom will enter a state of national… END_OF_DOCUMENT_TOKEN_TO_BE_REPLACED

Who would have known that religious prophets would be among the most loyal supporters of former President Trump? In fact, it has been observed that the most conservative Christians may have been the right amount of push for Trump’s presidential win back in 2016. Since Trump’s election back in 2016, numerous self-proclaimed “prophets” have been… END_OF_DOCUMENT_TOKEN_TO_BE_REPLACED

President Biden falls and slips multiple times on the Airforce One Steps and PEOPLE ARE GOING CRAZY! What’s the big deal? Some people are hating, while others are making memes just for the fun of it. We are all human, aren’t we? Everyone’s expected to stumble some time in their lives. However, with the internet… END_OF_DOCUMENT_TOKEN_TO_BE_REPLACED