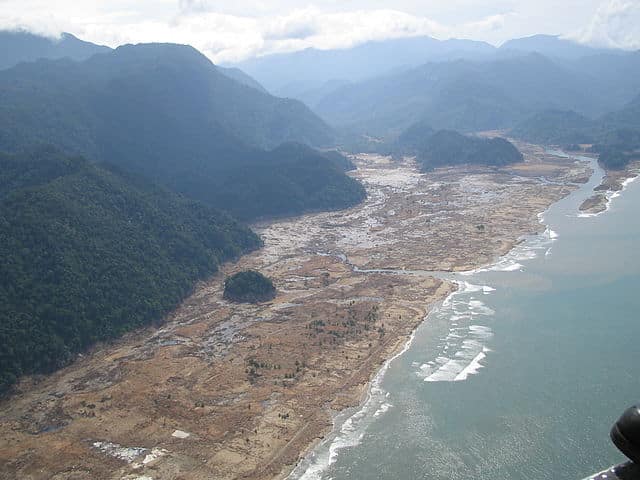 An Indonesian cop who was thought dead after the 2004 tsunami is found alive after almost two decades in a psychiatric hospital. An unbelievable but inspiring story of loss, the event has reopened some bitter memories and painful wounds of the past. Stories of finding lost family members are always inspiring. However, it is also equally heartwrenching thinking that all these years they could have been together and suffer less.

The 2004 tsunami is one of the worst natural calamities that happened in South East Asia. An underwater earthquake between the magnitudes of 9.1 and 9.3 is what caused the tsunami, the third-largest ever recorded in history. What made it worse is that it is considered as one of the longest ever observed, ranging between eight to 10 minutes.

It was an ordinary day, just after Christmas, and people were going about their normal daily routines. Suddenly, a series of tall waves hit the coasts claiming hundreds of thousands of lives. The area that was hit the most is the Aceh Province of Indonesia who recorded the most number of deaths. It took everyone by surprise. It was so unprecedented that no warnings nor sirens were heard as an alarm to the impending calamity.

Found in a psychiatric hospital

The cop, Abrip Asep, suffered from a nervous breakdown after the calamities. This mental breakdown is why he is in a psychiatric hospital and had stayed there all these years. Suffering from PTSD after a disaster is not uncommon. The 2004 tsunami that happened in Western Indonesia was such a traumatic event, that it claimed hundreds of thousands of lives. At the time of the disaster, Abrip Hasep was a cop on duty. Being at the forefront of that, trying (but ultimately failing) to save lives could truly affect one’s mental health.

His family reported him missing, but he was never found. After years of searching, the family was able to accept that he could truly be gone and he was declared dead. Interestingly, relatives claim that they accidentally found Abrip after a photo of him was posted on social media. They never expected such a miracle to happen, especially after searching for more than 16 years.

It is unclear why the family took almost two decades to find their missing family member. There are questions on whether the hospital informed the family or not. What happened to him during that fateful day remains a mystery, even if his family finally found him.

All those years, Abrip was in a psychiatric hospital and had no means of going home. There are no clear reports on why he never went home to his family in all those years. It is also unclear if he remembers who he is, or any of his family. They are finally reunited and Abrip is in a healthy state. This is what is important now.

Also Read: The Pandemic Distracted Us From Hong Kong and Myanmar, What is Happening Now?

The world is devastated by the news that Britain’s Prince Philip, the Duke of Edinburgh, has died at the age of 99. Palace media confirms that the Duke has expired mid-day today, April 9th. The announcement did not contain any specifics on the cause of death. The United Kingdom will enter a state of national… END_OF_DOCUMENT_TOKEN_TO_BE_REPLACED

Who would have known that religious prophets would be among the most loyal supporters of former President Trump? In fact, it has been observed that the most conservative Christians may have been the right amount of push for Trump’s presidential win back in 2016. Since Trump’s election back in 2016, numerous self-proclaimed “prophets” have been… END_OF_DOCUMENT_TOKEN_TO_BE_REPLACED

President Biden falls and slips multiple times on the Airforce One Steps and PEOPLE ARE GOING CRAZY! What’s the big deal? Some people are hating, while others are making memes just for the fun of it. We are all human, aren’t we? Everyone’s expected to stumble some time in their lives. However, with the internet… END_OF_DOCUMENT_TOKEN_TO_BE_REPLACED