Scott is known for his love of the McDonald’s meal so we’re sure it was especially fun for him to be able to order “one Travis Scott meal, please!”

It did get us thinking, many names across entertainment, politics, and business had their first foray into the working world as fast-food employees.

We, like others, think a story of hard work and dedication should be celebrated, so CDA Appliances took it upon themselves and made – the Celebrity Limited Edition Range!

Don’t get us wrong, you won’t be able to order these at your local fast-food restaurants, but you can still enjoy the concept and hey, you never know what collaborations this might inspire! 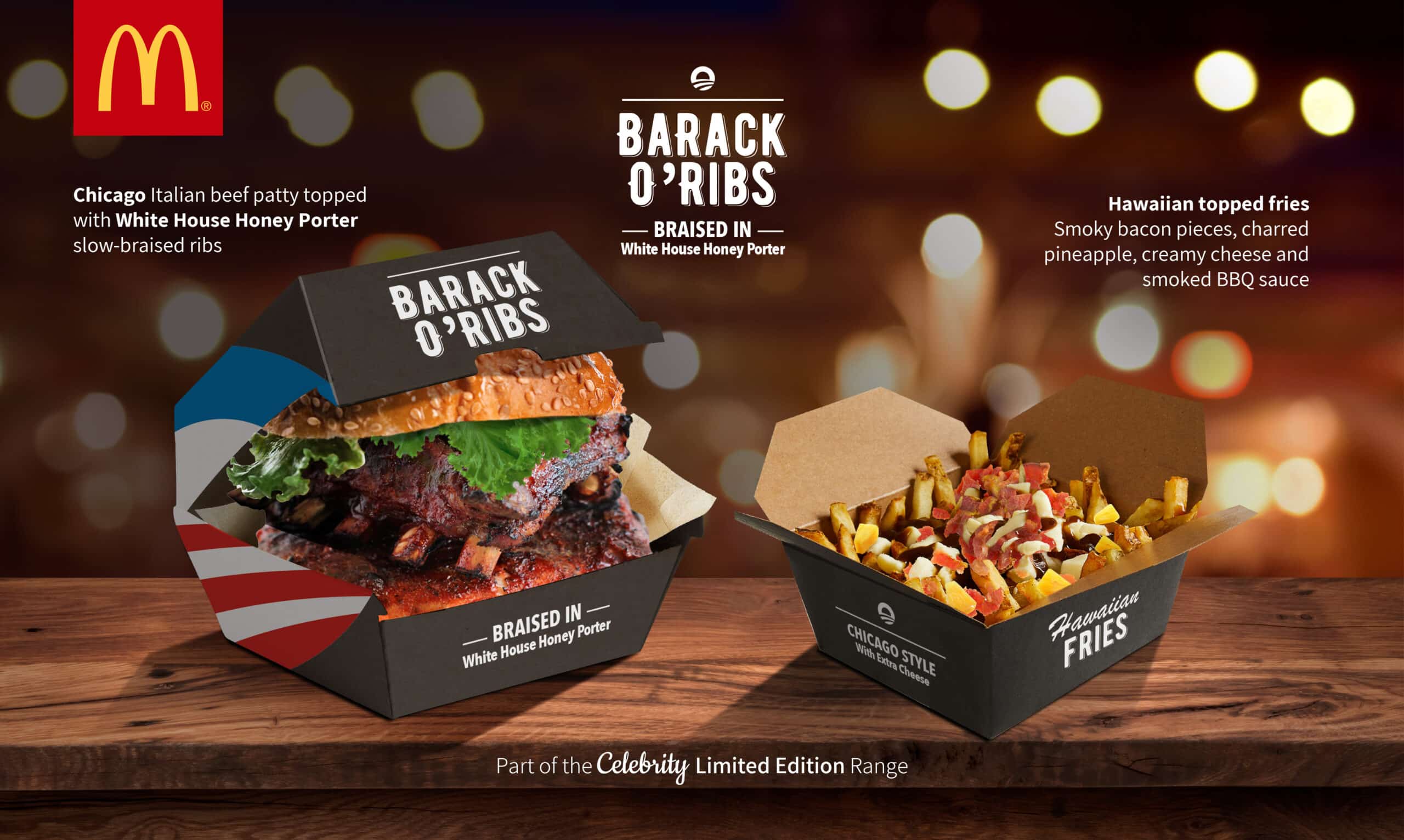 The Barack O’Ribs meal is made up of a Chicago Italian beef patty topped with White House Honey Porter slow-braised ribs. It comes with a side of Hawaiian fries, which we imagine as a generous portion of McDonald’s fries topped with smoky bacon, charred pineapple, creamy cheese, and BBQ sauce. This tangy treat is a throwback to Obama’s Hawaiin roots, being born and raised on the island.

Obama has consistently inspired us with his strong work ethos and message of positivity, and he actually learned a lot of his work ethic when scooping ice-cream. His first job was working at the Baskin Robbins store in Honolulu near his grandparent’s house.

He says this job taught him hard work and how to balance a career with friends and family. It seems to have served him well, as a lecturer at the University of Chicago Law School, a senator and… Oh yeah, the 44th President of the United States! 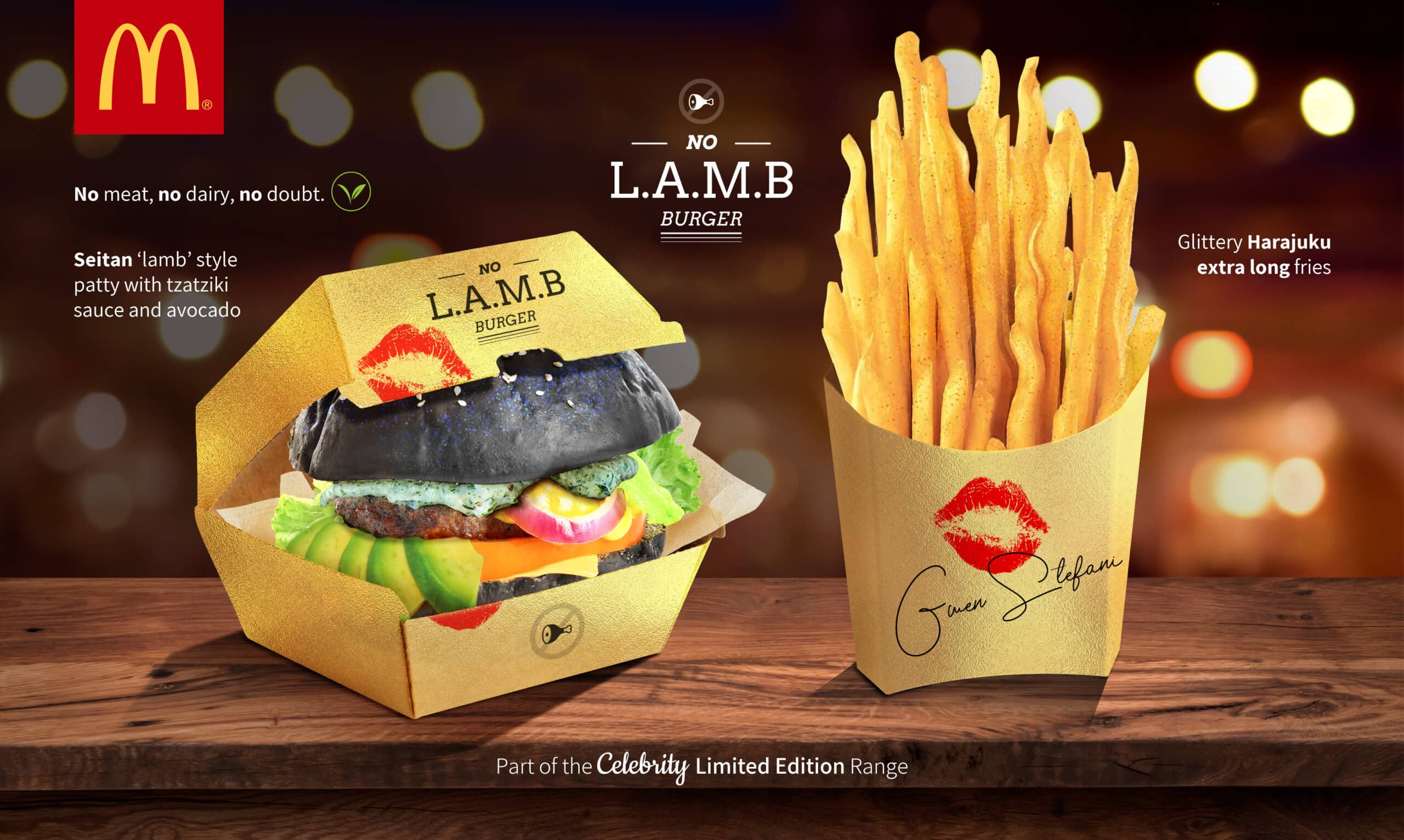 Gwen Stefani is a lifelong vegan so CDA wanted to make sure her dedicated meal was actually something she can enjoy. The L.A.M.B burger is made with a seitan lamb-style patty, dairy-free tzatziki, and avocado in a charcoal bun. The charcoal bun adds an extra level of aesthetic the stylish Stefani would appreciate. To really add the glam though, they’ve thrown in some glittery extra-long Harajuku fries.

It might seem surprising as a lifelong vegan, but Stefani’s first job was working in a Dairy Queen. If anything, we have No Doubt working here just made her determined to share her powerful vocals and unique ska-style with the world. 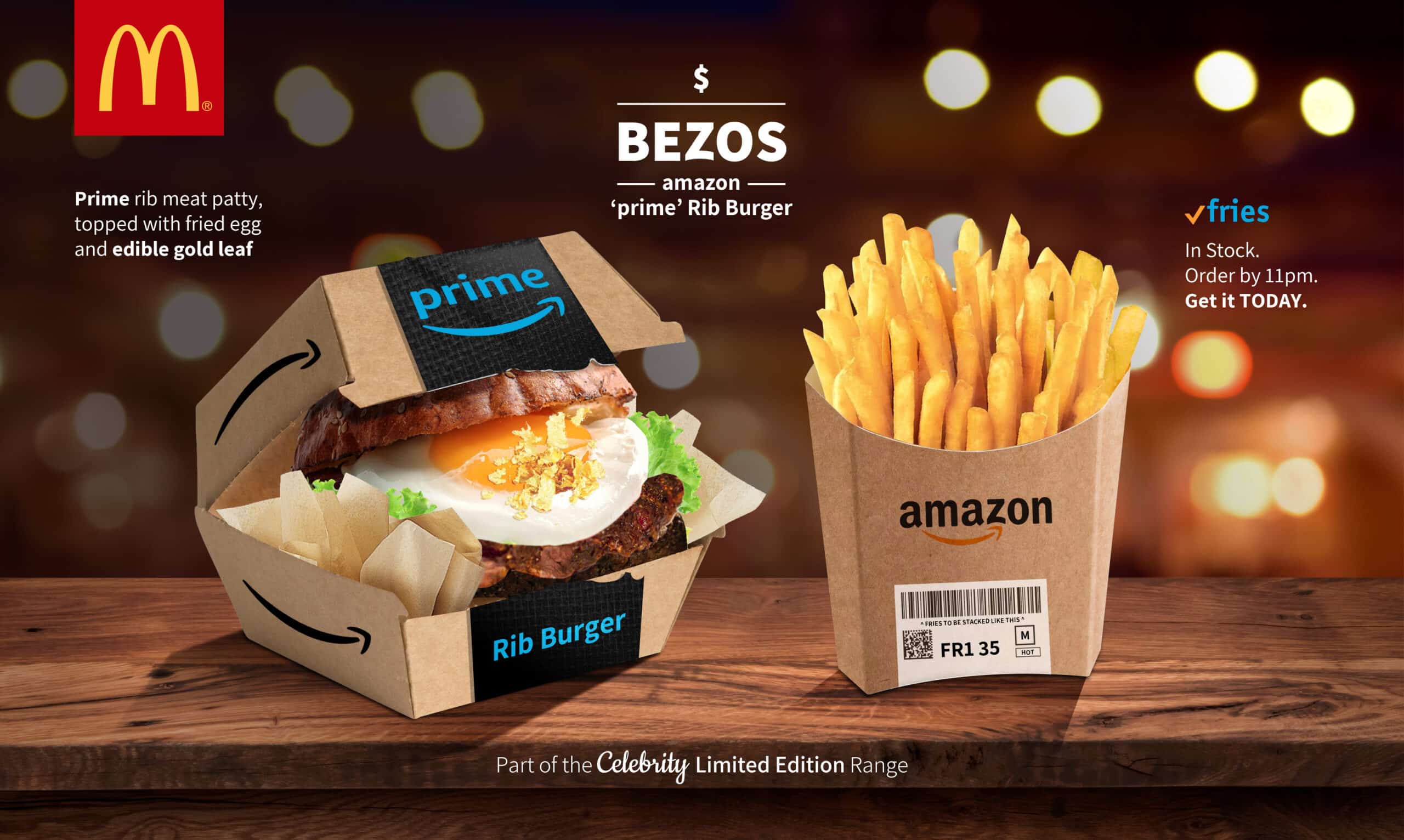 It had to be a Prime Rib Burger, didn’t it? Take a prime rib patty and top it with a fried egg, and, naturally, edible gold leaf. On the side is regular fries and don’t worry, it’s same-day delivery.

We know Jeff Bezos as the mastermind behind Amazon and one of the world’s richest men, but his beginnings couldn’t be further apart. Bezos’ first job in the early ’80s was working in Mcdonalds for just $2.69 an hour. Now he’s estimated to make about $2,537 a second so things have changed for him quite a bit.

Bezos works in more companies than we may realise, he now owns The Washington Post and space travel company, Blue Origin. For most of us though, he’ll always be well-known as the man who, for better or worse, created Amazon. 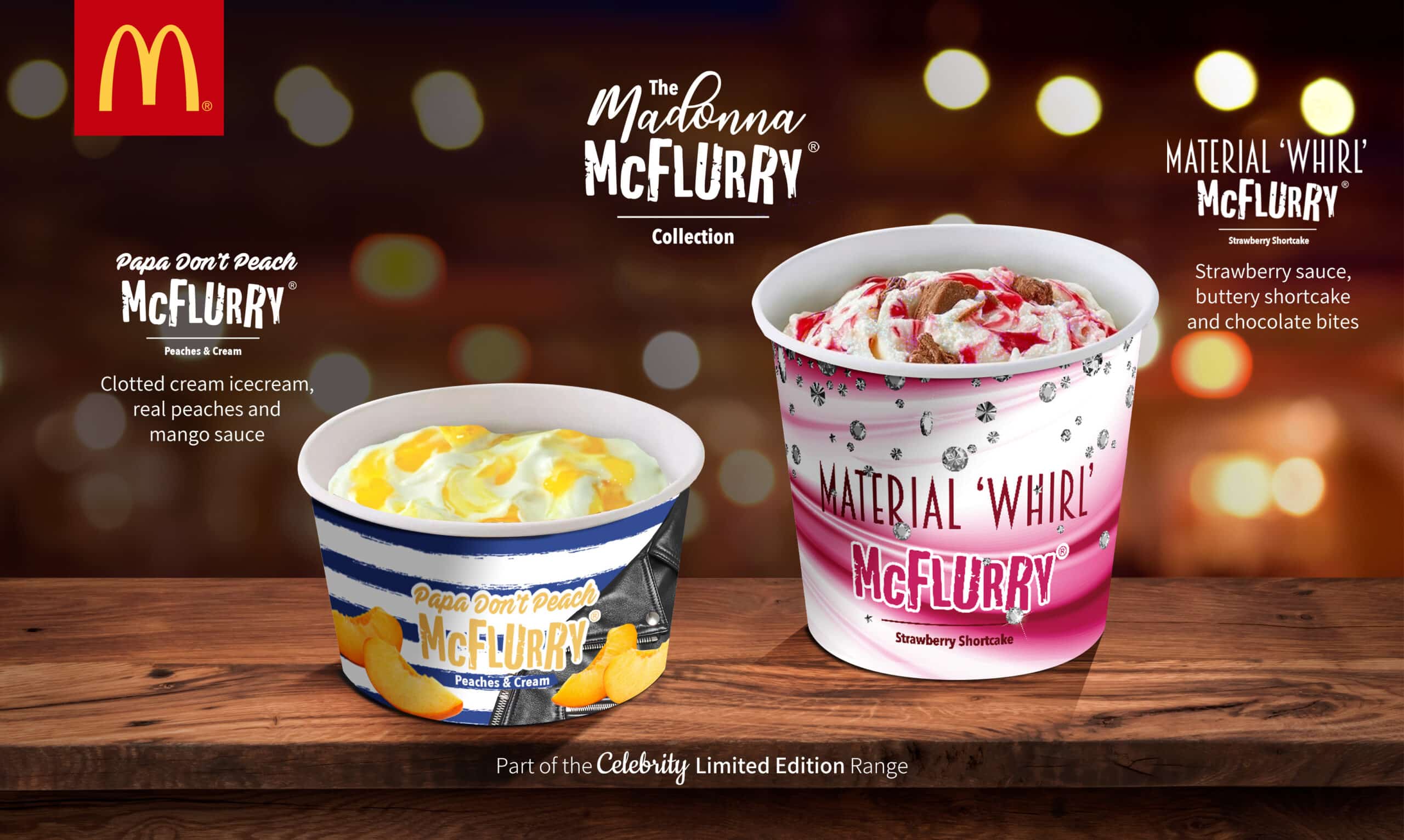 Madonna is an icon known for constantly setting trends and her distinctive looks so honestly, just one meal isn’t enough! Madonna demands an entire collection of McFlurry’s as memorable as she is.

Papa Don’t Peach is made with rich-clotted ice-cream, real peaches, and mango sauce. It’s packed with fun, fruity flavors but still has a lot of depth, just like early Madonna. Looking for something more decadent? Try Material Whirl. A classic McFlurry, but with strawberry sauce, buttery shortcake pieces, and rich chocolate chunks. It’s a decadent, rich treat with striking flavors for people who know what they want.

It’s hard to imagine Madonna working a minimum wage job, even knowing just how versatile she is, but the Queen of Pop was once the Queen of Donuts. When Madonna first made her way to New York City, from Detroit, she worked at Dunkin’ Donuts to pay the bills.

Mark Hamill – The Pies of Skywalker 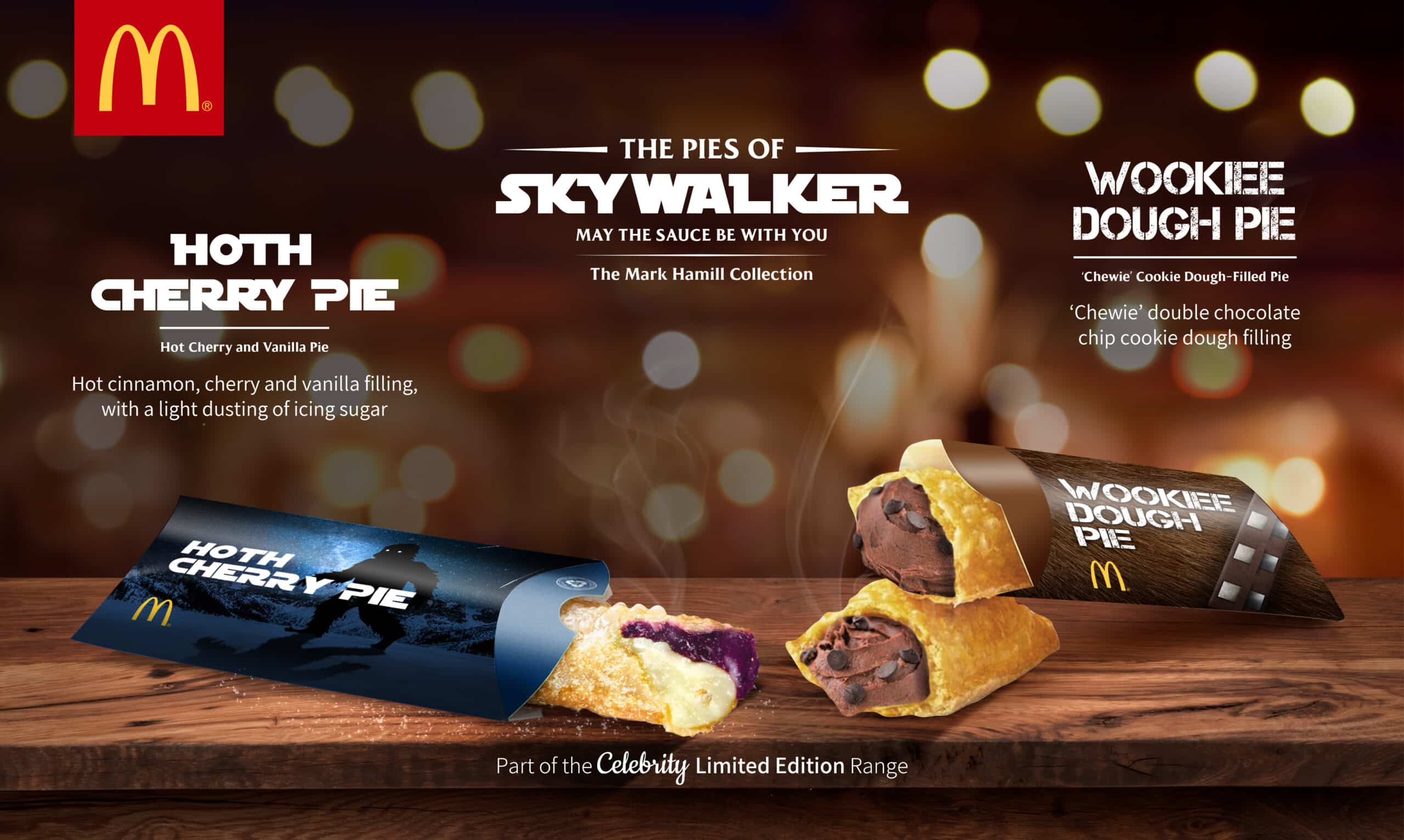 Just like Madonna, Mark Hamill’s contributions to pop-culture have been too iconic to sum up with a single meal. That’s why we created The Pies of Skywalker. Try a Hoth Cherry Pie, filled with juicy cherries, hot cinnamon, and vanilla custard filling with a light dusting of snowy icing sugar. If that’s a bit too fruity for you, try a Wookie Dough Pie with a ‘Chewie’ double chocolate chip cookie dough filling. Have you noticed we like puns yet?

Hamil joins the ranks of McDonald’s alumni, he first worked at the golden arches when was 16 years old. Hamil didn’t just stop with one fast-food joint under his belt though, whilst working in Hollywood towards his big break, he worked at Jack in the Box. He’s another who got fired, this time for doing character voices whilst working the drive-thru. The practice paid off as Hamil has been playing the Joker in animated series and games for 30 years now.

Not long after being fired, he was hired as Luke Skywalker so it seems to have worked out okay for him in the end.