Anonymous would like a whopper, fries, and a side of justice.

The Internet hactivist collective known as Anonymous is a mysterious voice for justice and freedom, but when they don’t have a cause, they get bored and cause some good old fashioned mischief online. Today, they targeted their efforts in the name of mischief (read: lulz) at Burger King, hacking and hijacking their Twitter account and tweeting/retweeting all sorts of entertaining gems.

Part of the hilarity involved completely re-branding the account as McDonalds, claiming that all Burger King employees are prescription drug-addled worker drones, and confessing that Burger King products are now made with 99% pure MDPV (that’s the zombie-making drug known as “Bath Salts,” by the way).

This kind of unpredictability is part of what makes Anonymous so fun. The government and other big-wigs fear them because they don’t understand them, but many of us nearer the bottom of the power spectrum are glad to have a seemingly unstoppable advocate that, at the very least, provides us with some good “lulz” from time to time.

Burger King unfortunately suspended their account, probably seeing no other recourse aside from watching their brand get flushed down the toilet. Fortunately, this is the Internet, and there are screencaps. 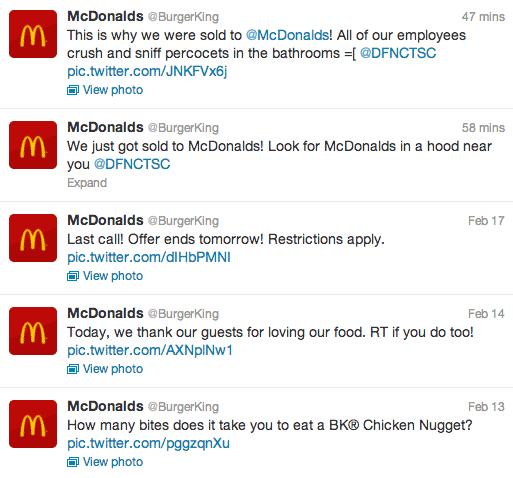 Come on, BK Lounge. This could be seen as a badge of honor, you know.

And just like when 9/11 happened, and Afghanistan was the first to ring the US up to say “It weren’t us …”

We empathize with our @burgerking counterparts. Rest assured, we had nothing to do with the hacking.

Did you see Burger King’s Twitter get hijacked by Anonymous?