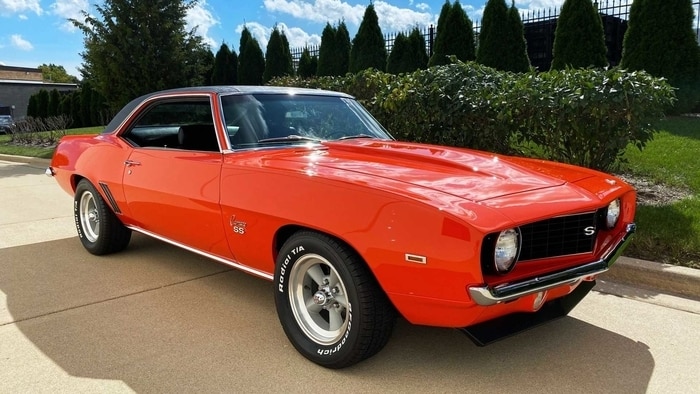 A man whose 1969 Camaro was taken 17 years ago was reunified with the car after spotting it while helping a pal purchase another vehicle.

Tommy Cook claimed the orange Camaro was stolen in Woodbridge in 2003 from his auto repair lot, and after filing a stolen vehicle report he continued renewing the muscle car’s missing status with police in Prince William County via the mail in the subsequent years. Cook told local reporters: “I never wrote that car off. I knew there would be a day and a time when I would get that car back. I didn’t know where, but I knew it was out there somewhere.”

Cook stated he had zero leads until 17 years later when a colleague contemplating the buy of a 1968 Camaro requested he to take a gander at a car listed for sale online near La Plata by a Maryland man. Cook alleged he showed up at the auto shop to check out the 1968 Camaro, however, his attention was seized by a 1969 Camaro situated in the corner of the garage. The seller informed Cook the green vehicle had been painted Hugger Orange originally, the color of his lost Camaro.

Cook explained he took a peek at the dashboard VIN and felt it was suspicious, thereby he looked under the hood at the VIN in a different spot — and it was the VIN of his missing car. Since he last owned it, Cook noted the vehicle has received some augmentations — including an engine being fitted in the once-engineless car. Since it was jacked in 2003, he suggested the Camaro had evidently changed hands roughly four times. Cook added: “Some people had put money into it. It was better than it was when it was stolen, but it’s still an ugly green.”

Woman Thanks Thieves For Stealing Her Car

Presidential pardons are one and many in the history of the US. There are many times when US Presidents granted reprieves for their citizen’s misdeeds. The US President may grant a pardon for any individual, including himself, for any crimes done against the country and its citizens. This issue of Presidential pardons has been trending… END_OF_DOCUMENT_TOKEN_TO_BE_REPLACED

President Biden has tapped Rachel Levine to be his assistant secretary of health, making her the first publicly transgender federal official. In 2017, Democratic Gov. Tom Wolf appointed Levine to her current post, making her one of the few transgender persons serving in appointed or elected positions countrywide. Biden said in a statement: “Dr. Rachel… END_OF_DOCUMENT_TOKEN_TO_BE_REPLACED

The minimum wage hike has always been an issue in the US for the past decades. With only a few hours before Biden gets inaugurated as the President of the United States, people are excited for all his promises to take place. One of these is his plans to raise the minimum wage of workers… END_OF_DOCUMENT_TOKEN_TO_BE_REPLACED