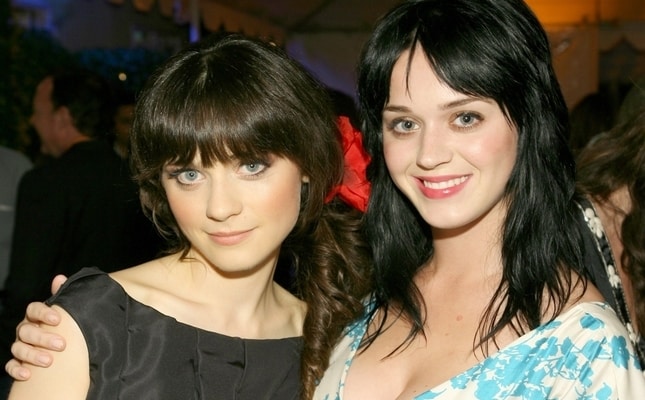 Recently, Katy Perry confessed to Zoey Deschanel on Instagram Live that she used to pretend to be her in order to get into clubs.

According to the Last Friday Night (T.G.I.F.) singer, it all began when she first relocated to Los Angeles as “a nobody” and her illustrious dead ringer was “just getting so huge at that time.” Katy spoke: “It was like Zooey Deschanel ran the world. In that moment, I was so complimented to look like you, but I have to admit something to you on a Live. When I first got to L.A., I went to the club a lot. And I wanted to get into the club and I had no money, I had no clout, I had nothing,” Perry continued, before sheepishly admitting, “And sometimes, I would pose as you to get into the club.”

How did Zoey take the news? Well, actually it turns out that she was cognizant of what the future Pop singer was up to thanks to a plethora of people who informed her they spotted “her” out. The actress recalled: “Folks would be like, ‘I saw you!’ But I’m such a goody-two-shoes and people kept going, ‘I saw you out! I made eye contact with you!’ And I was like, ‘No! And then everybody kept telling me about this girl Katy, ‘Katy, who looks just like you,’ and I’m like, ‘Who is this Katy?'”

She continued: “You never know when people say you look like somebody what they’re gonna look like. And I was like, ‘Oh my gosh, she’s gorgeous. Thank you.'” And though matters are evidently smooth as a baby’s bottom between the two, Katy went on to offer the (500) Days of Summer star a genuine apology as a result of her “wild child” capers in the past. “I was turned up to 11 at the club,” the songstress said before furthering, “I’m sorry if I misrepresented you. I wanted to say that now.”

Presidential pardons are one and many in the history of the US. There are many times when US Presidents granted reprieves for their citizen’s misdeeds. The US President may grant a pardon for any individual, including himself, for any crimes done against the country and its citizens. This issue of Presidential pardons has been trending… END_OF_DOCUMENT_TOKEN_TO_BE_REPLACED

President Biden has tapped Rachel Levine to be his assistant secretary of health, making her the first publicly transgender federal official. In 2017, Democratic Gov. Tom Wolf appointed Levine to her current post, making her one of the few transgender persons serving in appointed or elected positions countrywide. Biden said in a statement: “Dr. Rachel… END_OF_DOCUMENT_TOKEN_TO_BE_REPLACED

The minimum wage hike has always been an issue in the US for the past decades. With only a few hours before Biden gets inaugurated as the President of the United States, people are excited for all his promises to take place. One of these is his plans to raise the minimum wage of workers… END_OF_DOCUMENT_TOKEN_TO_BE_REPLACED