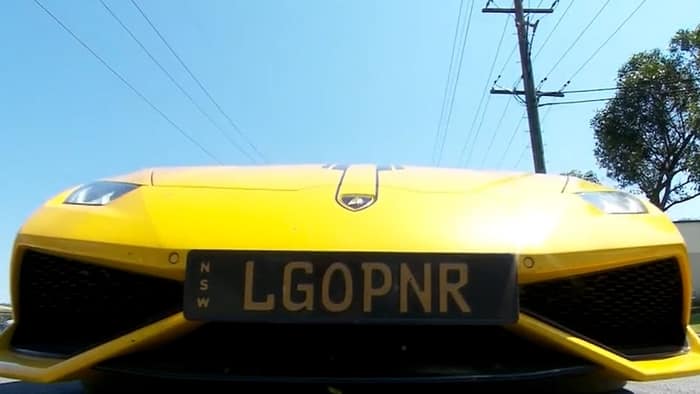 An attorney who had been battling to keep an X-rated license plate on his Lamborghini has been handed a brutish blow in court.

Peter Lavac, a Lamborghini-driving lawyer from Sydney, has pledged never to chicken out to “fat cat bullies” after his legal effort on Monday to keep his divisive ‘LGOPNR’ license plate went belly-up. Authorities confiscated his plates – which abbreviated stands for “leg opener” – after pulling the lawyer over in November to carry out a random breath test while he was operating his yellow Lamborghini. Since then, he has been combating to have his plates returned and desired a declaration from the court stating their components couldn’t be classed offensive.

After the hiccup, Lavac said he possessed a few ideas already for his next personalized registration. They include ‘FCUK’ and ‘XLEGO’ (which is short for “extra-large ego”). He spoke outside the courthouse: “The main reason I took these people to court was to send a message. And that was my way of saying, as politely as I know how, ‘Hey guys, this is the 21st century. This is Australia. This is a free country. This is a democracy. This is not the Soviet Union. So get a life. Get a sense of humor and get over it.”

Lavac continued: “This court decision doesn’t phase me in the slightest. I have never backed down from a challenge or a fight in my entire life. It’s not in my DNA. I paddled a surf ski across the South China Sea. I disabled a gunman at the Sydney Hilton – why on earth would I ever back down? The reason why this court decision doesn’t faze me is because we have already won – we won in the pub test – we won in the court of public opinion. And, hell will freeze over before I apologize! If they’re offended by it all I can say is get a life.”

The moment he was inaugurated, immediate changes made by Biden made headlines across the country. These are many of the controversial issues and topics that were shunned and ridiculed by the former administration. Americans can finally breathe a sigh of relief that these concerns have finally reached government policies. It seems clear that Biden has been… END_OF_DOCUMENT_TOKEN_TO_BE_REPLACED

Presidential pardons are one and many in the history of the US. There are many times when US Presidents granted reprieves for their citizen’s misdeeds. The US President may grant a pardon for any individual, including himself, for any crimes done against the country and its citizens. This issue of Presidential pardons has been trending… END_OF_DOCUMENT_TOKEN_TO_BE_REPLACED