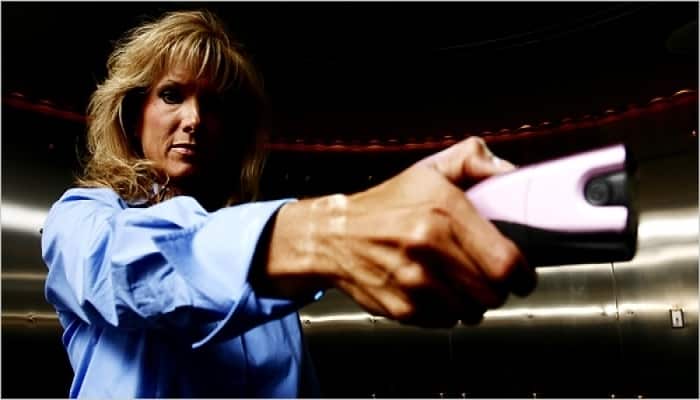 A 9-year-old victim of a Taser attack claimed for 4 seconds it felt like he was being tased as neighbors nearby heard him shout in pain.

Police in Riverton announced on Wednesday that 37-year-old April Shurtleff had been detained for investigation of two counts of making a threat of violence, two counts of aggravated assault, and two counts of child abuse. On Oct. 2, a 10-year-old boy and his 9-year-old pal were in a church parking lot riding scooters by 12920 S. 2700 West. according to a police affidavit, as the boys played in the lot, a vehicle pulled in, parked, and a female who was driving was “horizontally holding her phone, potentially filming them.”

The affidavit states the children, feeling awkward, left to go to an adjacent park. They came back a short time later with hopes the vehicle would be gone, however, it was still there; that’s when her son walked up to the car, according to Kelly Wright-Green, the mother of the 9-year-old boy’s mother. She said: “My son is not shy, so he walked up to the car and said, ‘What are you doing, why are you taking pictures?’” That’s when the lady rolled her window down, waved her Taser, and blurted, “I’m going to f**king tase you!”

Both boys started riding away on their scooters, though the woman “began backing her vehicle out of the stall, and driving toward (the boy) at a high rate of speed.” Scared he was going to be struck by the vehicle, one boy left his scooter and commenced running. Shurtleff then exited her vehicle and ran after the child. The affidavit adds: “She eventually caught up to him, reached her arm from behind, and placed the Taser on (the boy’s) chest, activating the Taser for what (the boy) described as about four seconds. (The boy) began screaming and crying, and the female quickly got into her vehicle and drove away.”

Girl In Bikini Gets Tasered For Charity, So It’s Okay We Guess [Video]

The moment he was inaugurated, immediate changes made by Biden made headlines across the country. These are many of the controversial issues and topics that were shunned and ridiculed by the former administration. Americans can finally breathe a sigh of relief that these concerns have finally reached government policies. It seems clear that Biden has been… END_OF_DOCUMENT_TOKEN_TO_BE_REPLACED

Presidential pardons are one and many in the history of the US. There are many times when US Presidents granted reprieves for their citizen’s misdeeds. The US President may grant a pardon for any individual, including himself, for any crimes done against the country and its citizens. This issue of Presidential pardons has been trending… END_OF_DOCUMENT_TOKEN_TO_BE_REPLACED