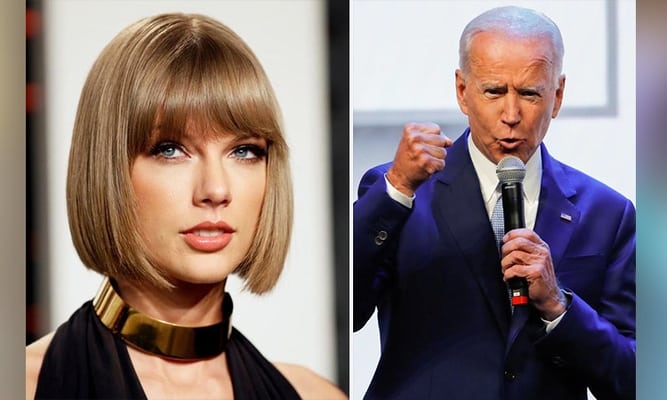 Taylor Swift announced Thursday that she would support Senator Kamala Harris and Joseph R. Biden Jr. in the presidential election.

Swift, who has roughly 88 million Twitter followers and about 140 million followers on Instagram, made her perspectives known in a recent interview. According to an excerpt from the interview, Swift said: “The change we need most is to elect a president who recognizes that people of color deserve to feel safe and represented, that women deserve the right to choose what happens to their bodies, and that the LGBTQIA+ community deserves to be acknowledged and included.”

I spoke to @vmagazine about why I’ll be voting for Joe Biden for president. So apt that it’s come out on the night of the VP debate. Gonna be watching and supporting @KamalaHarris by yelling at the tv a lot. And I also have custom cookies 🍪💪😘

“Everyone deserves a government that takes global health risks seriously and puts the lives of its people first,” she added. “The only way we can begin to make things better is to choose leaders who are willing to face these issues and find ways to work through them.” For years, Swift hid her personal political stances largely out of public view, leading to far-flung speculation. However, in the past months, Taylor has lambasted President Trump for “stoking the fires of racism and white supremacy,” and underlined the significance of mail voting. In August, she too hinted at her backing of Biden and Harris, reposting Harris’s proclamation about emerging as Biden’s running mate and replying only: “YES.”

Swift offered her support this summer for Black Lives Matter following the senseless homicide of George Floyd by law enforcement, and she also spoke out in support of the remotion of monuments of two guys she dubbed “DESPICABLE figures in our state history.” Swift also has put out posts commemorating a Supreme Court verdict safeguarding transgender and gay laborers from workplace discrimination and endorsing Juneteenth.

The moment he was inaugurated, immediate changes made by Biden made headlines across the country. These are many of the controversial issues and topics that were shunned and ridiculed by the former administration. Americans can finally breathe a sigh of relief that these concerns have finally reached government policies. It seems clear that Biden has been… END_OF_DOCUMENT_TOKEN_TO_BE_REPLACED

Presidential pardons are one and many in the history of the US. There are many times when US Presidents granted reprieves for their citizen’s misdeeds. The US President may grant a pardon for any individual, including himself, for any crimes done against the country and its citizens. This issue of Presidential pardons has been trending… END_OF_DOCUMENT_TOKEN_TO_BE_REPLACED