The feud between Black Keys drummer Patrick Carney and Canadian pop sensation Justin Bieber is hardly dying down. In fact, it got kicked into overdrive after Carney enraged Bieber fans by changing his Twitter profile picture and posing as the Biebs.

The Bieber and Carney feud began last week when the drummer opined that Justin didn’t deserve any Grammy nominations, telling a TMZ photographer that “Grammys are for like music, not for money … and he’s making a lot of money. He should be happy.”

the black keys drummer should be slapped around haha

It probably could have ended there, but now the Carney and Bieber feud has been kicked up another notch. Carney changed his profile picture to an image of Justin Bieber, changed his name to “Justin Bieber” and set his description as “official twitter for the actual verified Justin Bieber DOS virtual buddy.” 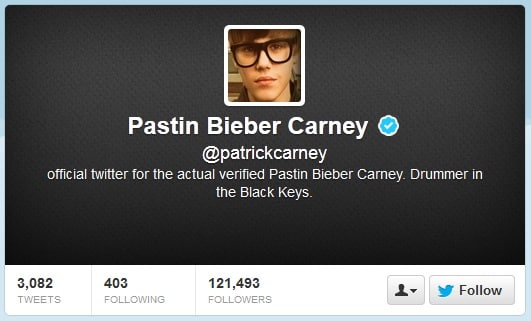 There is no patrick. i am justin now. RT @deannalorena: @patrickcarney Can we please have Patrick back?

Unfortunately, the social prank seems to be backfiring spectacularly on Carney, who is getting tons of hate from Bieber fans (and even some from his own).

The Beliebers doth protest too much:

@patrickcarney I hate your twitter .. the black keys drummer should be slapped around 😉 #REALBELIEBERS

@patrickcarney and your looking like a obsessed idiot who’s pressed that at 18 justin is more famous than you’ll ever be,but thanks:-) — 10DAYS (@biebslevine) February 17, 2013

@patrickcarney you look in mirror urself u will never be justin stop lying to urself is so patetic ok, swag out — Sabrina McDonnell (@KSaebin) February 17, 2013

@patrickcarney I used to like you, but why are you being such a dick? — Kelly (@KeshasPartyDJ) February 17, 2013

@patrickcarney Can we please have Patrick back? — Deanna (@DeannaLorena) February 17, 2013

Some do think this is all pretty funny:

@patrickcarney has basically turned twitter into the greatest performance artist experiment of all time.

What do you think of the Twitter feud between Carney and Bieber?