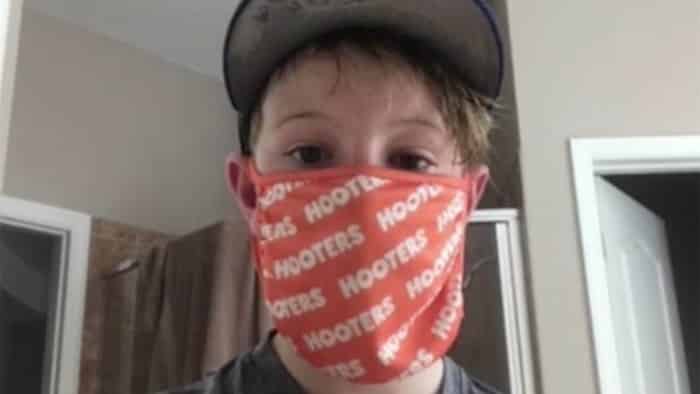 A student in the fifth grade was informed not to wear in class his Hooters face mask because it contravenes the Student Code of Conduct.

11-year-old Ian Golba has been sporting to class a mask from Hooters restaurant, an item he said he has been utilizing since school began in August at Sunset Park Elementary. The principal explained to him it was “inappropriate” earlier this week. Ian Golba expressed: “Because it expresses a woman’s body.” Steve, the boy’s father, opposes. “He’s not thought that there is anything wrong with this mask, nor does he think there’s anything wrong with the restaurant,” said Steve Golba.

A 5th grader says he was told to take off his Hooters mask again today at school, because it’s offensive. His father says there’s nothing offensive about a restaurant.#Fox35 ⁦@fox35orlando⁩ pic.twitter.com/iKPXtJzeFQ

Steve gave the school’s principal a call. Steve said, “He told me it was deemed offensive. I told him we go there as a family. We eat their wings, we watch sports. I said we have chocolate cake! We go there all the time it is not an offensive mask,” thinking that maybe the administrators at the school would alter their minds. “I believe it was a counselor that came and she told me to take it off and that it was inappropriate, so I needed to take it off. I asked her if I was allowed to wear it inside out and she said yes I could wear it inside out, so I wore it like that the rest of gym,” said Ian.

Steve Golba claimed his boy is disturbed by all the scrutiny this pulled in from administrators. “He was afraid he was going to get reprimanded, in trouble and perhaps suspended from school. I’ve never viewed it as anything but a restaurant. Do we feel women’s bodies are offensive? I don’t know. I don’t. The Principal told me that it was inappropriate. I said I don’t understand why it’s inappropriate. There’s nothing wrong with that mask. We do like the chicken wings. They [Hooters] have the best chicken wings.”