Keeping Career Resources Up to Date

A tip that is often shared in the human resources community is to always keep your resume up to date. You never know when you might need it, right? As the workforce evolves, so do resumes and how to keep track of them. Having a formal resume is imperative, but should you update your LinkedIn profile often as well? What if you are actively employed and not job searching?

So, how often should these resources be updated? In a new study, ResumeLab, a company that helps people through their job search, surveyed more than 1,000 Americans about their experiences with resume updating and LinkedIn profiles. Here are some of the results. 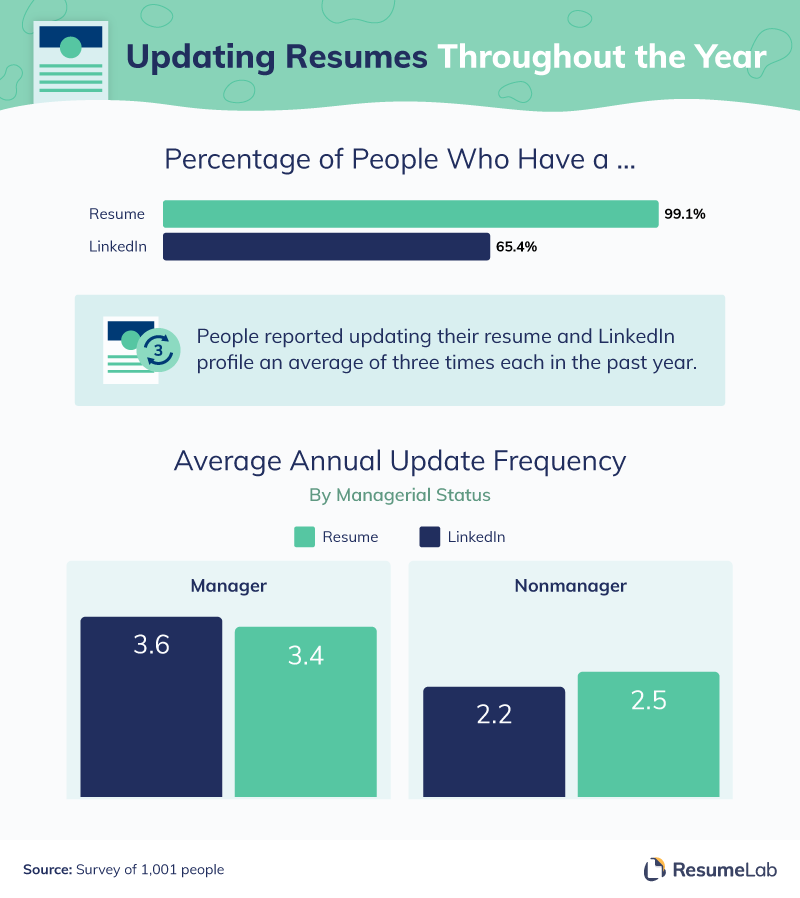 Of the people surveyed, nearly all (99.1%) had a resume, and 65.4% said they have a LinkedIn profile. They reported updating their resume and LinkedIn an average of three times in the past year. According to the job search website Indeed, people should update their resume at least twice a year, especially when already employed.

People like Tom Brady have to update their resume once in a while. Especially after having such a successful career. Showing off your experience and achievements could help land your next job. 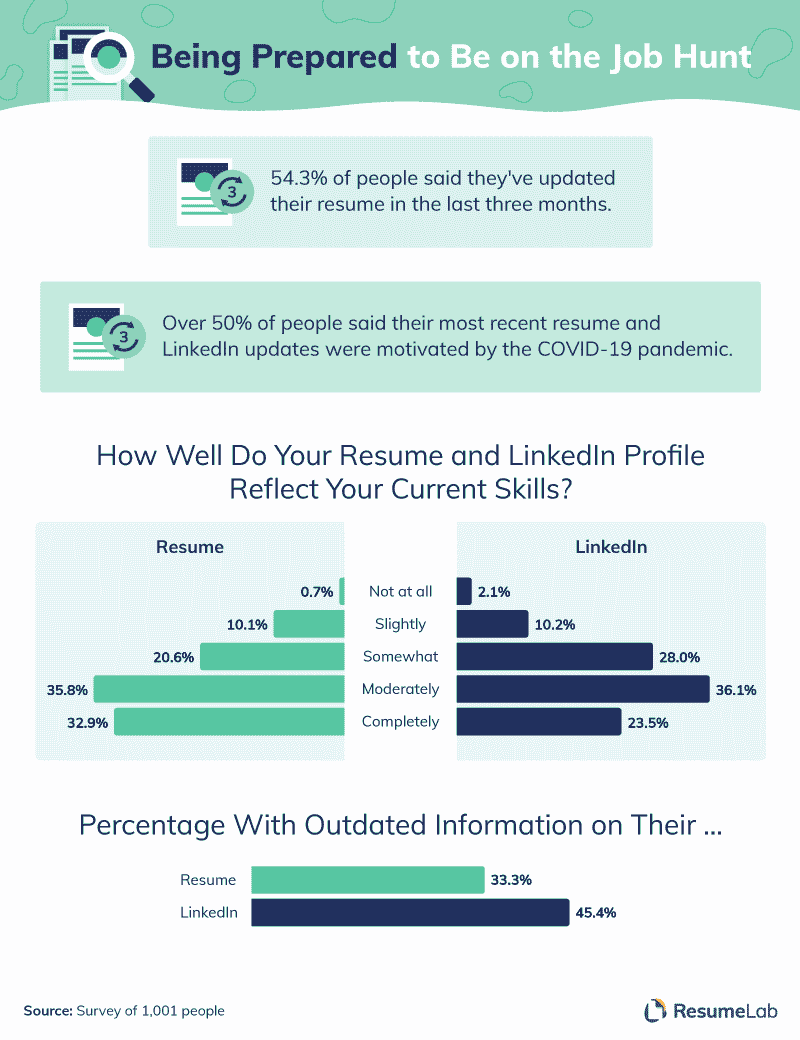 While resumes were generally a more accurate depiction of a person’s skills, according to the study, it wasn’t by much. Approximately 69% of people said their resume either moderately or completely reflected their current skills. In comparison, 60% of people felt the same way about their LinkedIn profile.

Nearly half (45.4%) of people had outdated information on their LinkedIn account, compared to the 1 in 3 people who had old details on their resume.

Improving Your Odds in the Job Search 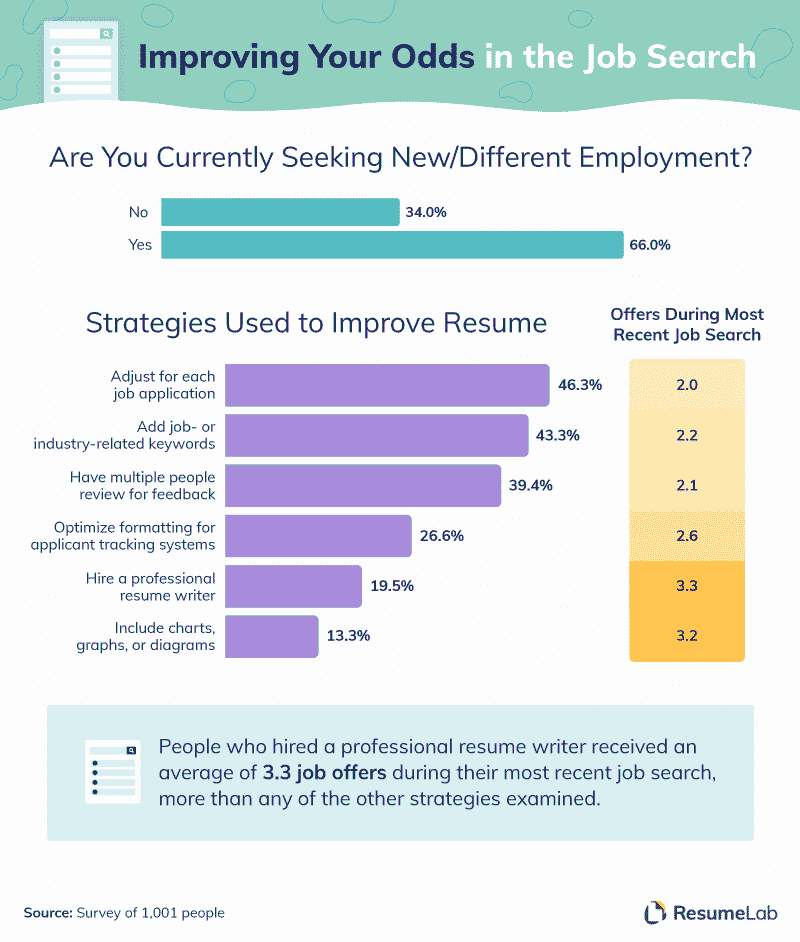 Approximately 3 in 5 people who participated in the survey were actively job hunting. What were some of the things they were doing to improve their chances of getting hired? Nearly half (46.3%) were adjusting their resume for each specific job. Of the people who did this, an average of two job offers were received. People also added job- or industry-related keywords (43.3%) or had multiple people review their resume for feedback (39.4%). Those people earned 2.2 and 2.1 job offers, respectively.

But the adjustments that few people made were the ones that earned them more job offers. Just 19.5% of respondents admitted to hiring a professional resume writer, and those who did receive 3.3 job offers during their search – the most job offers of any other strategy analyzed. Also, only 13.3% included charts, graphs, or diagrams in their resumes, but those who did earn an average of 3.2 offers. 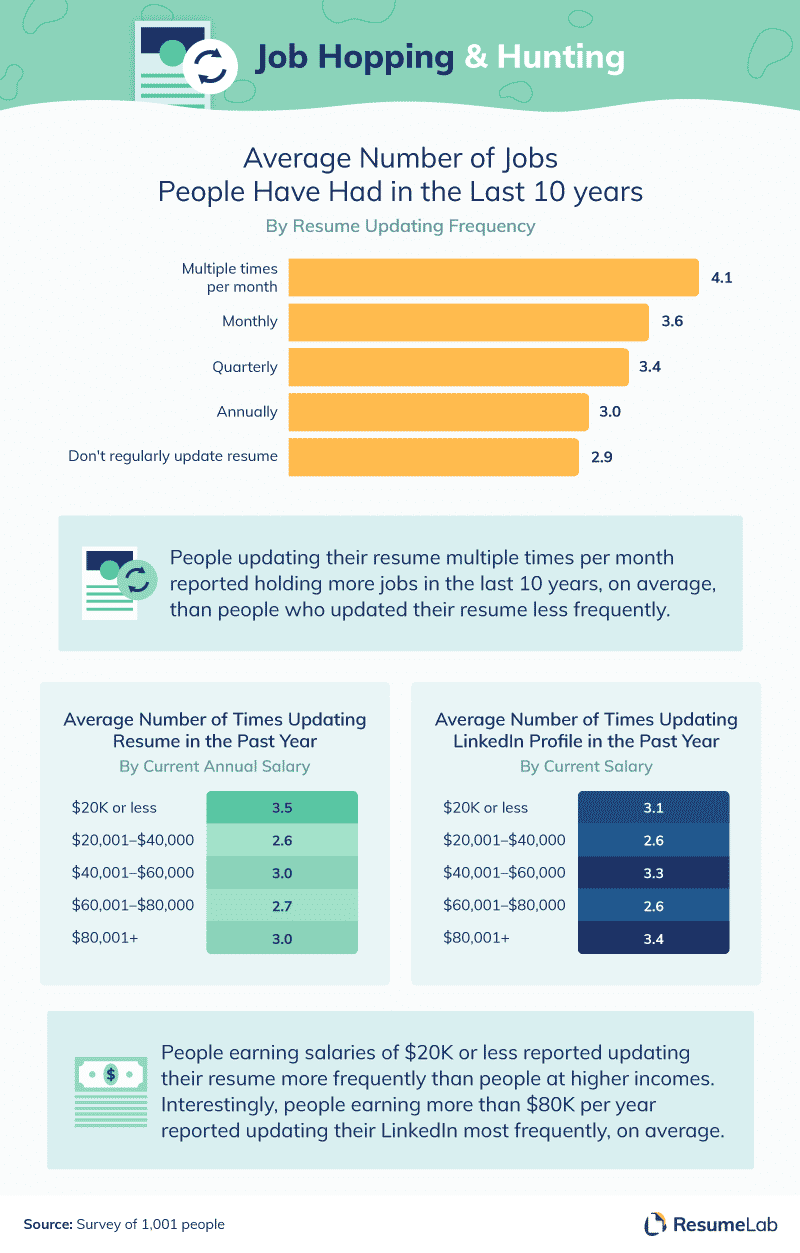 If updating a resume multiple times a month seems like too much to handle, the survey revealed that just updating your resume monthly or even quarterly would be helpful, as those people have had 3.6 and 3.4 jobs, respectively, over that same period of time.

Respondents who earned salaries of $20,000 or less reported updating their resume 3.5 times in a year, which was more frequently than most people at higher incomes. However, respondents earning the highest incomes – more than $80,000 a year – also admitted to updating their LinkedIn more often, on average, amounting to 3.4 adjustments in a year.

Whether you are actively job searching, happily employed, or job hunting for a nanny to educate your husband, updating your resume and LinkedIn profile is always a good idea. People never know what kind of opportunities are around the corner, so being prepared to share this information with potential employers is always a good thing.