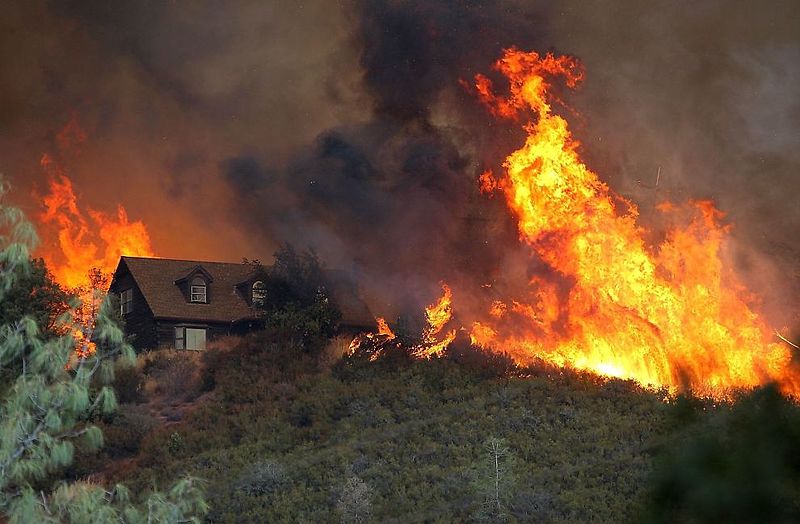 It is undeniable that the biggest cause of forest damage through fire in the world would be humans. Either it is from ignorance, irresponsibility, or plain stupidity, no one can deny that humans cannot prevent forest fires. More than 80% of wildfires in the world are caused by humans and their activities. Without the proper equipment and knowledge, forest fires could spread large and fast. It will surely damage anything on its way and will pity no one.

Here are a few of the craziest causes of wildfire in the world:

The recent bushfire in California is allegedly caused by a gender-reveal party. Allegedly, a pyrotechnic machine malfunctioned and set thousands of acres of both private and public property ablaze.  Soon, 911 was called and the poor attempts to put out the fire has created a wildfire ridiculously huge in the middle of the coronavirus pandemic. The forest fire became so huge images of a red sky over California trended throughout the weekend. Now, more than 3,000 residents are forced to evacuate and millions of dollars in properties have been damaged.   Seriously, another crisis is not what Californians need at the moment.

This is not the first time that a gender-reveal party caused massive, unintentional damage to forest land in the US. A similar scenario happened in 2017 after a gender reveal party went wrong in Arizona. It has sent more than 40,000 acres of forest lands to succumb to fire. The woman who made gender-reveal parties a hip, trending event has taken to social media to call on parents to ‘stop it’ with the parties. She has received so much backlash on social media yet she claims it was never her intention to let couples and young parents set their hometowns and communities on fire.

Any teenager may have done something stupid and dangerous once in their life. But, not as stupid and dangerous as unintentionally setting fire to 48,000 acres of forest land. One 15-year-old in Oregon has accidentally created a wildfire so large ash fall could be felt near the Canadian border. The young boy pleads guilty to the crime, admitting that he has sent firecrackers towards Eagle creek aiming for the water. However, the wind has other plans. Instead, the firecracker ignited a bushfire that took more than three months to contain. Hundreds of hikers were trapped but thankfully, no casualties were recorded.

The judge that presided the case filed almost 40 million US Dollars in restitution, an insurmountable amount for a young 15-year-old boy. In an acknowledgment that the teenager cannot pay, the judge suggested that he could complete 1,900 hours of community service, five years in probation, and start making payments after 10 years. Many experts pointed out that the penalties are unusually high and may be considered unfair for the young boy.

In the Philippines in 2018, several campers face penalties up to 360,000 USD and possible imprisonment. This is after unintentionally causing fire to 14-acres of a protected national park. What happened? A portable torch was accidentally left behind at a campsite. Later on only the group’s leader was penalized and penalties were reduced to only 47,000 USD. All other members of the hiking group were absolved of the crime. Every professional hiker must know the seven essential principles of hiking, all of which revolve around a ‘leave no trace’ policy, to avoid these kinds of untoward incidents.

Mt. Pulag is one of the most popular destinations for hikers in the Philippines because of its difficult trail and unique, natural vegetation. The summit of Mt. Pulag does not grow trees. Instead, it has a unique carpet of dwarf bamboo. Only one other mountain in the Philippines has similar vegetation – Mt. Halcon. All the damages caused by the bush fire could take no less than six months to recover if strict rehabilitation procedures are observed.

A seasonal firefighter from Arizona has pleaded guilty to charges of starting the Rodeo-Chediski fire in Arizona in 2002. He confessed that he has ignited these so-called ‘wildfires’ in hope that the federal Bureau of Indian Affairs will hire him as a quick-response fire crew. The Rodeo-Chediski fire is two different sets of wildfires in two different locations in Arizona. However, dry vegetation and wind have caused the two bushfires to combine into one disastrous wildfire. In the end, it took almost a month to kill the wildfire and has damaged about 469,000 acres of forest land.

Since the damaged area was so huge, restoration did not come cheap. Ecosystem resources were destroyed and the water cycle within the area was severely disrupted. The government had to put in the effort to drop more than 20,000 tonnes of grass seeds, winter wheat, and other seedlings. This is to help speed up recovery and stimulate the restoration of damaged vegetation within the area.

Israel’s Iron Dome has protected the country against missile attacks for years. The Iron Dome in Israel is the biggest of its kind in the world. No other countries in the world use the same air defense system, meaning it is one of a kind. The tension between Israel and Gaza has been going on… END_OF_DOCUMENT_TOKEN_TO_BE_REPLACED

The world is devastated by the news that Britain’s Prince Philip, the Duke of Edinburgh, has died at the age of 99. Palace media confirms that the Duke has expired mid-day today, April 9th. The announcement did not contain any specifics on the cause of death. The United Kingdom will enter a state of national… END_OF_DOCUMENT_TOKEN_TO_BE_REPLACED

Who would have known that religious prophets would be among the most loyal supporters of former President Trump? In fact, it has been observed that the most conservative Christians may have been the right amount of push for Trump’s presidential win back in 2016. Since Trump’s election back in 2016, numerous self-proclaimed “prophets” have been… END_OF_DOCUMENT_TOKEN_TO_BE_REPLACED