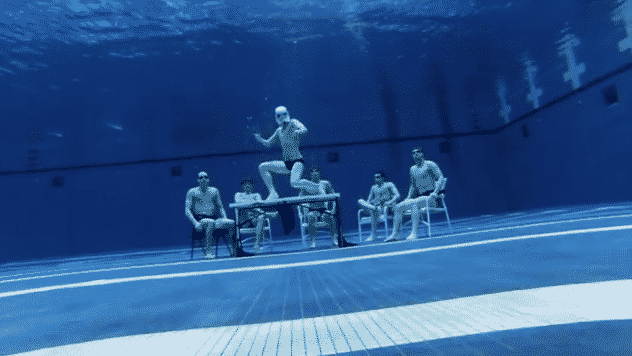 YouTube users may be asking themselves “What the heck is the Harlem Shake?” lately. While we’re still not entirely sure ourselves, the viral successor to 2013’s “Gangnam Style” and “Call Me Maybe” is seeing a deluge of tribute clips being uploaded in a relatively short period of time.

“As of the 11th, around 12,000 ‘Harlem Shake’ videos had been posted since the start of the month and they’d already been watched upwards of 44 million times. As you can see in the chart below, over 4,000 of these videos are being uploaded per day and that number is still likely on the rise.” 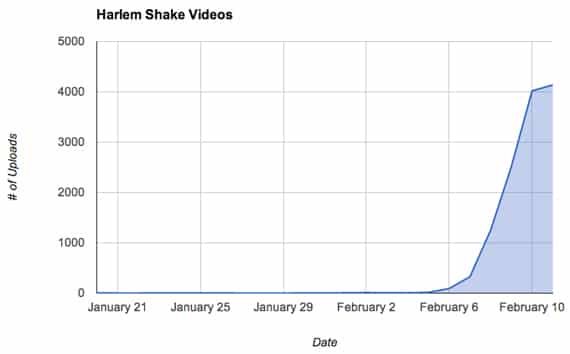 Let’s absorb that truth for a moment: 4,000 videos a day. Considering average video length, that’s 33 hours of the “Harlem Shake” every single day, making it “literally humanly impossible to watch every single one of them,” notes the Social Times.

So why is “Harlem Shake” so viral-friendly? My guess is that it mostly has to do with production value and length. “Call Me Maybe” and “Gangnam Style” saw a number of clones, but the ones that got the most traction were pretty well choreographed and boasted decently high production quality. The length is another issue. No one wants to watch you lip sync “Call Me Maybe” or perform a horse dance for just shy of four minutes. But the “Harlem Shake” is only about 30 seconds long, and requires very little actual talent to pull off.

That’s not an insult to the people who make these videos. The nature of the “Harlem Shake” just doesn’t require you to do anything but look silly and crunk like a madwoman for 15 seconds of the 30.

Lastly, what about the original “Harlem Shake?” That’s harder to quantify (but not too much harder, we’re pretty good at this). The original dance actually came to be back in the 80s. The latest version, which you hear in the background of every “Harlem Shake” video, is a more recent electronic/dance track by Brooklyn DJ Baauer, which is set to enter the UK singles chart.

The “Harlem Shake” phenomenon is interesting because unlike “Call Me Maybe” and “Gangnam Style,” the deluge of clones has completely overshadowed the original. It’s more of a viral concept that doesn’t have an originator so much as it has inheritors.

However, the guy who started the latest trend isn’t too sore about being lost in the static, according to The Root. Filthy Frank has picked up over 7 million views on his “original” video, and has earned 100,000 new subscribers to his YouTube channel thanks to the “Harlem Shake.”

Here’s Filthy Frank’s “Harlem Shake,” followed by a few we picked out ourselves:

The one with the boobs [NSFW]:

Gift-giving isn’t just a seasonal affair between friends, families and acquaintances. The art of gift-giving is also conducted on a national scale with countries often sending each other big, weird and expensive gifts. Experts in all things gifts, Vanilla Reindeer put together some examples of these expensive and odd gifts that have been shared between… END_OF_DOCUMENT_TOKEN_TO_BE_REPLACED

There are lots of ways you can make Pres. Trump feel welcome: you can offer him coffee, or mow a penis into a field for him to view as his plane lands. The willie in question has been chopped by Born Eco ahead of the arrival of President Trump, who visited the UK Monday for… END_OF_DOCUMENT_TOKEN_TO_BE_REPLACED

The year isn’t even halfway over, yet Donald Trump has managed to make a fool of himself and our country countless times. From inviting the national college football champions, the Clemson Tigers, all the way to the White House for some McDonald’s to his to the dreaded results of Mueller’s investigation, it has been one… END_OF_DOCUMENT_TOKEN_TO_BE_REPLACED

Republicans have always said that when they gained control in Congress, they would work to overturn Roe v. Wade and here they are, cashing in on that promise one state at a time. So far, Alabama, Arkansas, Georgia, Kentucky, Missouri, and Ohio have all passed incredibly restrictive laws on abortions, making it illegal for women… END_OF_DOCUMENT_TOKEN_TO_BE_REPLACED

If you’re on Snapchat, then you’ve probably played around with (and were likely horrified by) their filter gender swap filters. While you’re probably using these filters to send hilarious pics to your friends, some guys using them to create Tinder profiles. What likely started out as a joke has quickly evolved, and these guys are… END_OF_DOCUMENT_TOKEN_TO_BE_REPLACED

“Milkshaking” is a hilarious trend in Britain where a milkshake is thrown at and ideally lands on a far-right politician or activist. The point of this nonviolence protest is to humiliate them without causing injury. Physical injury at least. There’s no doubt that milkshaking has led to a few bruised egos. Not only is this… END_OF_DOCUMENT_TOKEN_TO_BE_REPLACED