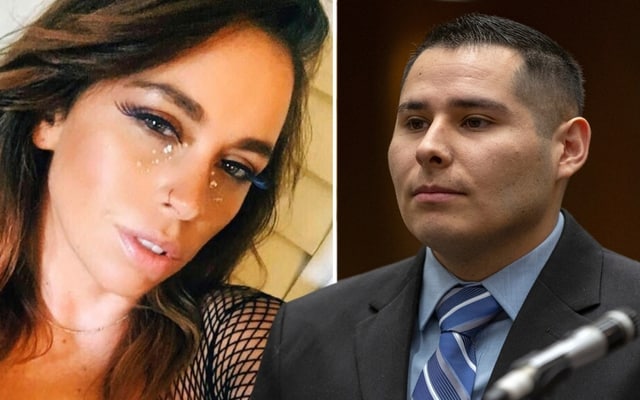 An LAPD officer by the name of David Rojas was busted on his body camera reportedly groping a deceased woman’s boobs.

The family of Elizabeth Baggett filed the lawsuit against the Los Angeles Police Department four-year veteran, claiming mishandling of human remains, intentional infliction of emotional distress, and invasion of privacy among other complaints. Rojas, 27, was charged last December with one felony count of having sexual contact with human remains without authority. The cop was released on bail in January and pled not guilty.

Prosecutors say on Oct. 20, 2019, the 27-year-old and his partner were responding to a call about a potential lifeless body in a residential unit, where they discovered Baggett, 34, who had supposedly perished from an overdose. The lawsuit said when his partner left him alone in the room, Rojas shut off his body camera and groped Baggett’s bosoms and caressed her nipples. The compromising footage was recorded by the body camera still, which continues to tape for two minutes after the cam is turned off. Since, the accused officer has been placed on administrative leave.

The lawsuit alleges the video was viewed too by other LAPD members. Allred remarked during a press conference on Wednesday: “Learning… that the video of her alleged sexual molestation has been viewed by others sickens [the family] and is deeply disturbing.” Janet Baggett, Elizabeth’s mother, claimed she was enraged that Rojas had so little respect for a human being that passed away. “I want justice for my daughter because of this horrible disgusting act,” said Janet. “I live in fear that the video will surface and another devastation will be added to what is already unbearable.”

The world is devastated by the news that Britain’s Prince Philip, the Duke of Edinburgh, has died at the age of 99. Palace media confirms that the Duke has expired mid-day today, April 9th. The announcement did not contain any specifics on the cause of death. The United Kingdom will enter a state of national… END_OF_DOCUMENT_TOKEN_TO_BE_REPLACED

Who would have known that religious prophets would be among the most loyal supporters of former President Trump? In fact, it has been observed that the most conservative Christians may have been the right amount of push for Trump’s presidential win back in 2016. Since Trump’s election back in 2016, numerous self-proclaimed “prophets” have been… END_OF_DOCUMENT_TOKEN_TO_BE_REPLACED

President Biden falls and slips multiple times on the Airforce One Steps and PEOPLE ARE GOING CRAZY! What’s the big deal? Some people are hating, while others are making memes just for the fun of it. We are all human, aren’t we? Everyone’s expected to stumble some time in their lives. However, with the internet… END_OF_DOCUMENT_TOKEN_TO_BE_REPLACED