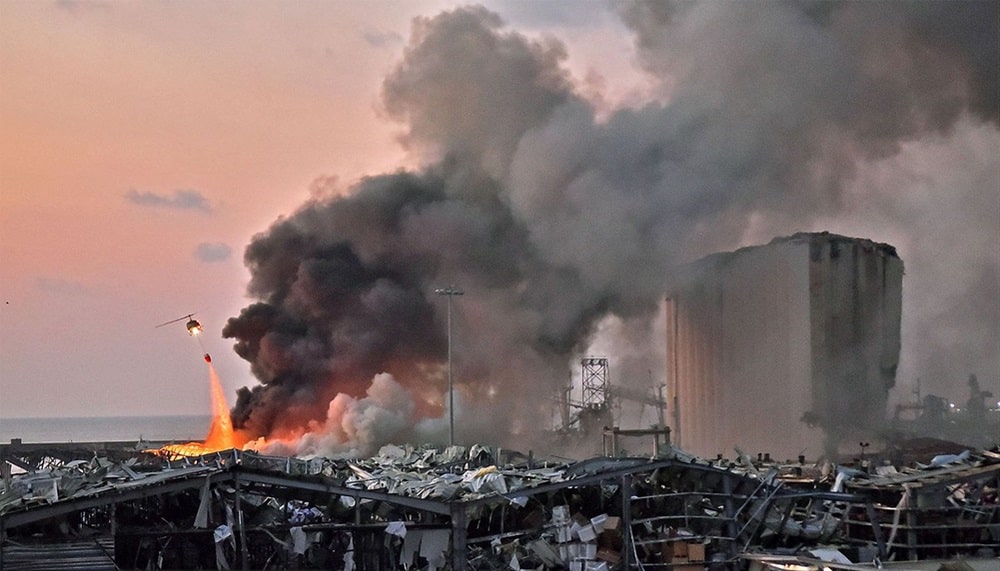 The Beirut blast which happened in the early evenings of Wednesday, August 5, made the residents and authorities scramble in confusion. Everyone was asking: what happened, was it an act of terrorism? Based on some reports, it would seem that the explosion is an accident caused by the mishandling and improper storage of confiscated bombs and explosives. What made this such a tragedy is that the explosion happened in a highly-populated area near residential communities and tourist sites. Hundreds of lives were lost, thousands are wounded, and there are still a number of people missing under the rubble.

Despite the horrors which happened that day, here are a few inspiring stories of heroism amid the Beirut blast:

#1 Brave firefighters breaking their way into the doomed warehouse

It is said that the mission they were sent for was doom. A total of 10 firefighters responded to an initial fire at a warehouse in a Beirut port. These firefighters were sent by the police to respond to smoke coming from the port. Originally there to put down the fire, they broke into the warehouse to find the cause. However, no less than a few minutes after they arrived, a large blast from the warehouse occurred. No part of the team survived, even the firetruck and ambulance dispatched did not survive the blast. The only female in the group, the paramedic named Sahar Fares is confirmed dead and is now buried. All others are missing but are now presumed dead.

It was reported to them that the kind of fire they were to fight only contained firecrackers. Additional information may have saved their lives. According to the fire department chief, if they had been properly informed of the amount of ammonium nitrate contained within the warehouse, their actions would have been different. They could have called for an evacuation of the place instead of dispatch of a team of firefighters.

#2 Rescuers digging through the rubble to find survivors

Hundred of volunteers from all over the world have been dispatched to Beirut to race against time to find survivors beneath the rubble. There are volunteers coming from Russia, Germany, France, among others. Although the chances are quite low, the rescuers still hold on to that small hope that there could still be survivors more than three days after the catastrophic event.

They are focusing first on areas they believe has a high number of people like control rooms in the ports, offices in the silos, and the like before searching any other place.

A few days after the blast, people are now finding some sense of calm and normalcy. Many are rummaging through their old homes to find whatever they could salvage, others packing up to move somewhere they deem is safer. Some are having their homes fixed. One of the things that are commonly ignored in calamities like these is displaced pets. A team of volunteers in Beirut has gathered all the lost pets he could find to potentially find their owners or find them a new home.

#4 A nurse saves three newborns during the blast

A nurse in Lebanon is now hailed a hero after a photo of her holding three newborn babies calmly in her hands after the blast went viral on the internet. It is alleged that she did this to protect the babies from the possibility of a larger blast since the hospital is within the area of the port. A total of 18 people are reported dead from the same hospital due to the blast. As the people from the hospital evacuated, the nurse took it upon herself to think and act fast to carry not just one but three babies out of the hospital and into safety. Many people are awed, touched, and amazed by the calmness of the nurse and how she was able to carry all three newborns in her hands.

#5 Nannies, Parents, and Guardians saving lives of children before their own

There are videos circulating the internet where people are sharing what happened to their homes during and after the blast. Images of parents hiding their children under tables as a means of protection against debris were also a common sight. There is also a video of a nanny pulling a small toddler away from a large window, showing that quick thinking will always save lives. A story that one migrant worker carried five children under her care down flights of stairs has also become viral.

There are multiple counts of heroism during this catastrophe. However, many people are still so confused as to why it ever happened to begin with. The government is yet to provide a clearer explanation, to at least appease those who have lost family members and loved ones.

Also read: How to Cope When a Loved One Gets the Coronavirus

All allegations remain just as allegations, even half a year after the outbreak of the coronavirus pandemic in China. Everyone outside of the country is left to their own devices to decide whether or not what they see on social media is true. However, things take a different turn when the complaints start to trend… END_OF_DOCUMENT_TOKEN_TO_BE_REPLACED

In his latest weekly blessing at the Vatican, Pope Francis has warned Catholics about the dangers of gossip. Although his weekly blessing is not related to COVID-19, the current pandemic tormenting the world, he has raised important points that everyone must remind themselves of. Pope Francis has been in the highest seat of power in… END_OF_DOCUMENT_TOKEN_TO_BE_REPLACED