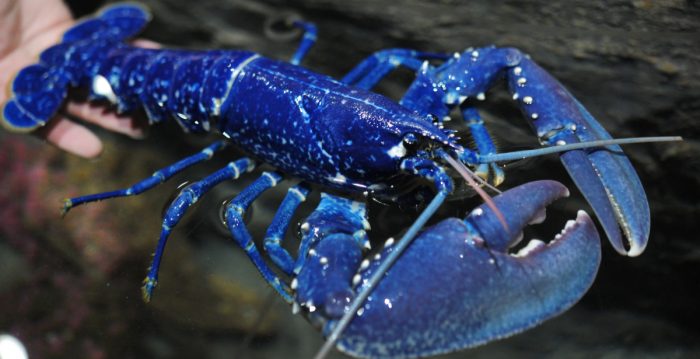 Clawde, a blue lobster with a rare colored shell, was recently delivered to a Red Lobster — but instead of being cracked open and consumed, she luckily found a new abode at the Akron Zoo.

The zoo said finding a blue lobster is exceedingly rare — the genetic abnormalcy that triggers their shells to be blue rather than red takes place once in every 2 million lobsters. Where Clawde was found, the culinary manager of the Red Lobster told reporters that the restaurant personnel thought at first the malacostraca looked “fake.” Anthony Stein said: “It’s definitely something marvelous to look at.”

Angie Helbig, a server, added that staff made sure the blue lobster didn’t end up on an entree plate, knowing the crustacean had to be special due to the Blue Lobster Award, an employee service award issued by the seafood chain. Helbig stated: “We kept [it] in the tank and just made sure that nobody took him in the back for dinner.” Akron Zoo’s animal care manager, Kathleen Balogh, told news outlets that Clawde is doing great, though from the restaurant to the zoo “there is a little bit of wear and tear from its journey.”

The zoo insisted that Clawde is adapting to her new domicile in the Komodo Kingdom building and that the staff has nicknamed her dwelling “Clawde’s Man Cave.” Lobster aficionados interested in seeing (instead of eating!) the blue lobster will have to wait a bit, as the Komodo Kingdom is presently closed to guests because of the novel COVID-19 (coronavirus) outbreak.

One Restaurant Gets Lobsters High Before Boiling Them — Here’s Why

The US arms sale industry is large and successful. More than 30% of exported weapons in the world come from the United States. They supply to no less than 90 nations making it one of the largest suppliers of weapons in the world. The US makes an estimate of almost 200 Billion dollars in annual… END_OF_DOCUMENT_TOKEN_TO_BE_REPLACED

Now that the election results are almost final, we all want to ask what’s going to happen to Donald Trump after leaving the office? All US Presidents inevitably reach the point where they leave the White House.  Besides, the constitution states that all US Presidents are subject to a two-term limit. What do former presidents… END_OF_DOCUMENT_TOKEN_TO_BE_REPLACED

This is the first time in modern history that the US held presidential elections in the middle of a pandemic. In truth, the US elections may have overshadowed COVID-19 and the side effects are limitless. America is facing a tough crisis of discontentment with the current administration. An understandable case but a situation that may… END_OF_DOCUMENT_TOKEN_TO_BE_REPLACED