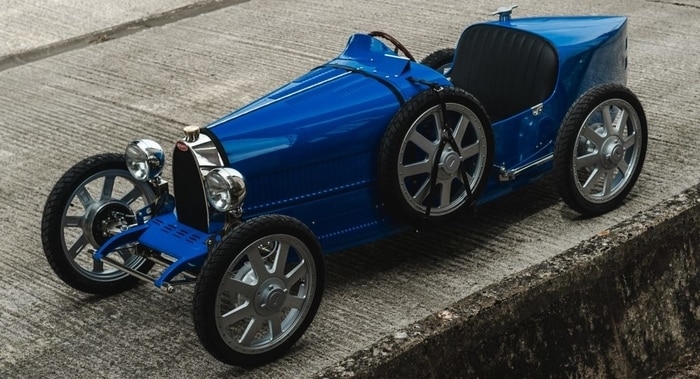 Dubbed the Bugatti Baby II, this new miniature all-electric car begins at about $35,000. It’s a contemporary version of the original Bugatti Baby from roughly a hundred years ago. Ettore Bugatti desired to make a vehicle in 1926 for his youngest son therefore he helped make a roadworthy half-sized imitation of the renowned Bugatti Type 35 racing car. To begin with, it was only meant to be one, however, the car maker’s customers were so thrilled by the small car that the company created around 500 more.

The new Baby II is 75% of the size of an authentic Bugatti Type 35. While the Baby II original was intended for an eight-year-old to operate, the new car is designed for young teens. And, it’s electric this time. The Baby II is available in three versions. The base model comes with two driving modes. The car can get up to 12 miles an hour in Novice mode. In Expert, it’s capable of reaching 30 miles an hour. The Pur Sang and Vitesse versions can move even faster.; respectively, these modernized versions go for $50,000 and $68,000, and a Speed Key comes with them.

Andy Wallace, Bugatti test driver, and the same fella who on a test track pushed a Chiron over 300 miles an hour, assisted in developing the Baby II’s suspension settings. Wallace noted in a statement: “In its most powerful mode when you have the ‘Speed Key’ inserted, the Baby II is a very fast car. It’s quite impressive and brilliantly fun.” Purchasers of the two more premium variants can select whatever paint colors they want, including all the colors accessible on the Chiron. A configurator is available online at bugattibaby.com.

The US arms sale industry is large and successful. More than 30% of exported weapons in the world come from the United States. They supply to no less than 90 nations making it one of the largest suppliers of weapons in the world. The US makes an estimate of almost 200 Billion dollars in annual… END_OF_DOCUMENT_TOKEN_TO_BE_REPLACED

Now that the election results are almost final, we all want to ask what’s going to happen to Donald Trump after leaving the office? All US Presidents inevitably reach the point where they leave the White House.  Besides, the constitution states that all US Presidents are subject to a two-term limit. What do former presidents… END_OF_DOCUMENT_TOKEN_TO_BE_REPLACED

This is the first time in modern history that the US held presidential elections in the middle of a pandemic. In truth, the US elections may have overshadowed COVID-19 and the side effects are limitless. America is facing a tough crisis of discontentment with the current administration. An understandable case but a situation that may… END_OF_DOCUMENT_TOKEN_TO_BE_REPLACED