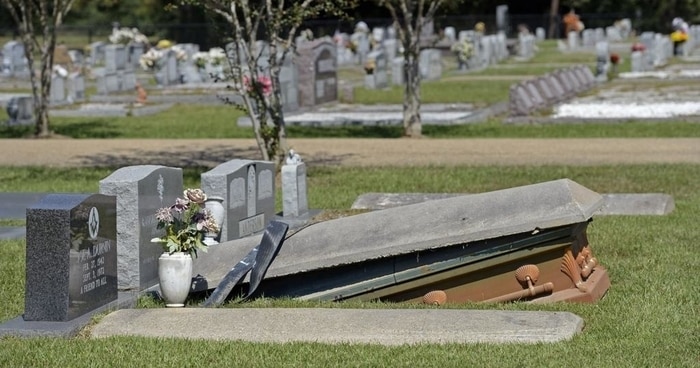 A man was sentenced to 15 years in prison after he was convicted of shooting a firearm into the open grave of a male killed merely two days beforehand.

According to a news release in Chicago from the U.S. attorney’s office, John J. Tharp Jr., U.S. District Judge, handed down the arduous sentence Wednesday after 57-year-old Elston Stevenson pled guilty to one count of illegal possession of a firearm by a felon. Mr. Stevenson, who possesses a criminal record dating to the 80s, was charged for firing one shot into Murad Talib’s grave during a funeral service November 2017 at the Evergreen Cemetery, in south suburban Evergreen Park.

Cornelius A. Vandenberg, Assistant U.S. Attorney, contended in the government’s sentencing memo: “When a felon brings a loaded gun to a populated area and uses the gun to threaten and endanger strangers, this conduct will not be tolerated. The mourners were all in the immediate vicinity of the defendant when he produced the loaded weapon and were placed in danger by the defendant’s reckless firing of the weapon into the gravesite.”

At least 20 mourners and Stevenson were present for Talib’s burial when he yanked a pistol, fired a bullet, and asserted, “you deserved it.” In their assertion, federal authorities furthered that Stevenson reportedly also said: “You ain’t (expletive).” Just two days prior to the shooting at the graveside, Talib, 39, was discovered mortally shot inside his Palos Heights home. The medical examiner in Cook County unearthed that Talib had endured numerous gunshot wounds and declared his death a homicide. When the shooting took place, Palos Heights police stated Talib’s killing was not an indiscriminate act and cops presume he was targeted, though furnished no other details.

Man Pays To Have Bride Killed – Then, She Crashes Her Own Funeral

“Fun Funeral Facts” List Has Many Rethinking Their Burial Plans

The Michelle Obama Podcast was released on the 29th of July and can be streamed on Spotify, both for free and premium users. The world is currently hyped that the Former First Lady of the United States has released the first episode of her latest podcast. What made listeners even more excited was when she… END_OF_DOCUMENT_TOKEN_TO_BE_REPLACED

Research in Britain has deduced that there are a total of six “general” classifications of COVID-19 symptoms. The research, originally published in June of 2020, has revealed that the symptoms of COVID-19 can be generalized into six different categories. This is based on the data collected from a symptom tracking app. It has been widely proven… END_OF_DOCUMENT_TOKEN_TO_BE_REPLACED