The Rise of ASMR Videos

If you’ve never heard of the concept of ASMR videos, prepare to enter into a world that may seem very strange at first. And perhaps even longer than that. Firstly, ASMR stands for Autonomous Sensory Meridian Response, which may not make things any clearer, so we’ll sum it up more simply by saying that it’s videos of people whispering to help you get to sleep. There’s a lot more to it than that, of course, and whispering is just one aspect of ASMR, but that’s it in a nutshell.

ASMR, as a concept, began in 2007 when someone posted in a forum a post titled WEIRD SENSATION FEELS GOOD which may be the best description possible of this topic. It’s about those slightly odd but not unpleasant and usually relaxing tingles you get in your brain by little things like someone reading you a bedtime story or someone writing on your hand. You probably recognize that sensation just from the memories of those events. 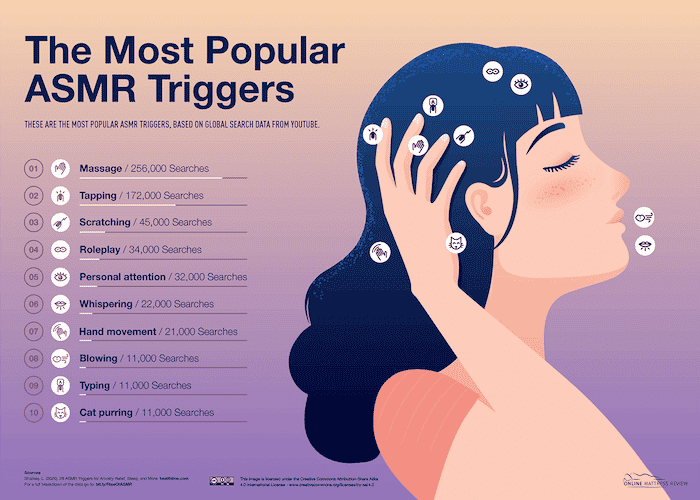 And ASMR is a big business today. YouTubers have picked up on it and there are many thousands out there offering their services, with the likes of Gentle Whispering amongst the early adopters, though their subscribers and video views are today dwarfed by people like Jane ASMR and Hongyu ASMR, who have an average of over 2m views per video, raking in millions of dollars a year from it.

The diversity of what appeals to fans can be shown by the most popular YouTuber being Ice Cream Rolls, whose ice cream tutorials have earned them 8.3m subscribers and 2.6m average video views. But even people whose videos pre-date ASMR by several decades have found themselves finding whole new audiences, like the painter Bob Ross, whose relaxing lessons have gained a second life.

ASMR is a global phenomenon, with users in places like Brunei, Sweden, Iceland, Norway, New Zealand and France responsible for the most searches on YouTube. Digging into the data also demonstrates which ASMR triggers are most popular, with massage, tapping and scratching up at the top of the list, while noises like typing and cat purring are also popular for their relaxing qualities. 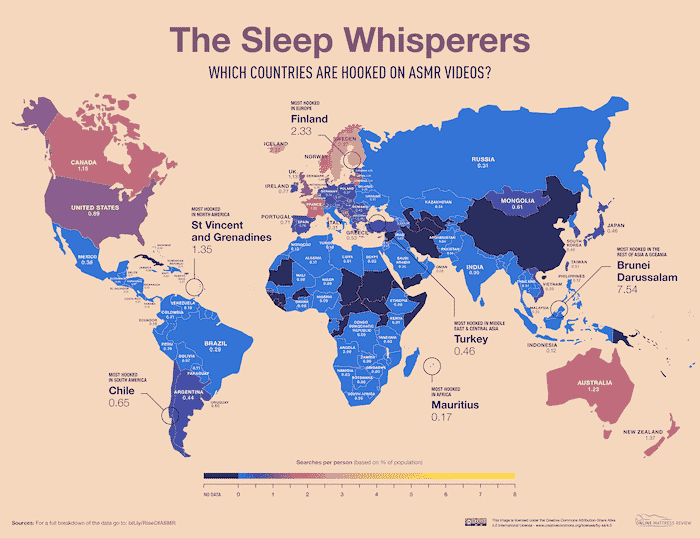 Paper folding, simulated hairdressing and roleplays are also much-loved by devotees and it hit the big time in 2019 when a Zoe Kravitz ASMR advert was shown during the SuperBowl half-time. Some of the most popular ASMR videos on YouTube show how accurate a description WEIRD SENSIBLE FEELS GOOD turned out to be, like Making Glossy Slime With Piping Bags, which shows bright gooey paints being mixed together in a slimy, satisfying swirl. It’s been watched 114m times and has made its creator over $150k.

Other weirdly satisfying things to feature in popular ASMR videos include a car driving over cigarette lighters, someone carving soap, and lipsticks sinking into clear slime. So now you know, which type of videos will you be watching?