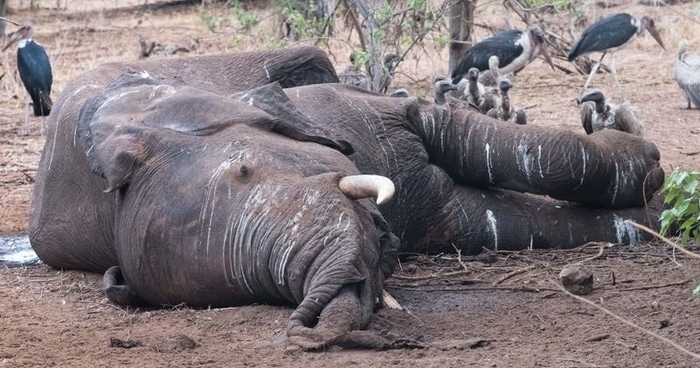 An enigma encircles the “totally unexampled” fatalities of hundreds of elephants in Southern Africa over the past two months.

Since the start of May, Dr. Niall McCann noted collaborators in Botswana had sighted the carcasses of more than 350 elephants in the Okavango Delta. Dr. McCann, of the National Park Rescue based in the UK, informed the BBC regional conservationists first notified the government back in May after they embarked on a flight across the delta. According to the government, no one knows why the large mammals are declining, with lab findings on specimens still weeks away.

“They spotted 169 in a three-hour flight,” said Dr. McCann. “To be able to see and count that many in a three-hour flight were extraordinary. A month later, further investigations identified many more carcasses, bringing the total to over 350. This is totally unprecedented in terms of numbers of elephants dying in a single event unrelated to drought,” he furthered. “It is only elephants that are dying and nothing else. If it was cyanide used by poachers, you would expect to see other deaths.”

The way the elephants seem to be passing away is from something possibly undermining their neurological systems, a conclusion derived from observations of the animals roaming in circles, Dr. McCann said. “Yes, it is a conservation disaster – but it also has the potential to be a public health crisis,” stated the doctor. “We have sent [samples] off for testing and we are expecting the results over the next couple of weeks or so.”

Karma Crush: Hunter Gets Trampled to Death by Elephant He Was Trying To Kill

The Michelle Obama Podcast was released on the 29th of July and can be streamed on Spotify, both for free and premium users. The world is currently hyped that the Former First Lady of the United States has released the first episode of her latest podcast. What made listeners even more excited was when she… END_OF_DOCUMENT_TOKEN_TO_BE_REPLACED

Research in Britain has deduced that there are a total of six “general” classifications of COVID-19 symptoms. The research, originally published in June of 2020, has revealed that the symptoms of COVID-19 can be generalized into six different categories. This is based on the data collected from a symptom tracking app. It has been widely proven… END_OF_DOCUMENT_TOKEN_TO_BE_REPLACED