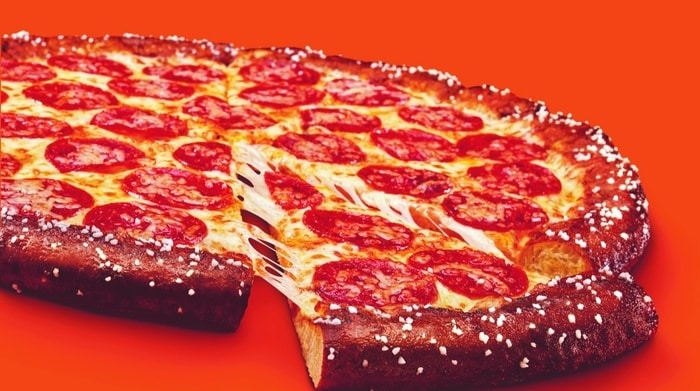 A couple says they were flabbergasted when they unsealed their ready-made pizza to see pepperonis organized in the form of a reverse swastika Tuesday.

Jason Laska told reporters: “Things like this are keeping hate alive in this world. We all need the exact opposite of that right now.” Laska claimed he was headed home from his mother-in-law’s residence when he stopped to grab supper for his family. At Little Caesars in Brook Park, Ohio, roughly 15 miles south of Cleveland, he stresses he picked up a “hot and ready pizza” from the warmer. He got to his house, ready to devour it when the twosome opened the box, and suggest they discovered the vile emblem on their pizza.

“We were literally silent for a few moments,” remarked Laska. “Misty (his wife) asked me if I had ordered it and they had to make it and they gave me that on purpose thinking they were targeting me because they stereotyped me or something.” Laska expressed he attempted to phone the store before 10 p.m., near its closing time, though claims their line was tied up. “That’s when we posted to social media, wanting to express our anger and show our family and friends what kind of place it (Little Caesars) was.” Jill Proctor, a spokeswoman for Little Caesar Enterprises, informed reporters in a statement Wednesday two employees fessed up and were instantly terminated.

Proctor said: “We have zero tolerance for racism and discrimination in any form. We’re deeply disappointed that this happened, as this conduct is completely against our values. We have also reached out to the customer to discuss this personally with him.” While he alleges he’s pleased Little Caesars contacted him and admitted the malfeasance by taking speedy action, Laska stated he isn’t wholly contended about the Swastika move, however, hopes the ex-employees learned a vital lesson through the quandary. “This is an example of what needs to change in our world,” he said, “And we hope that people start to realize that and use their time to make those changes and not blast us for trying to do it.”

The Michelle Obama Podcast was released on the 29th of July and can be streamed on Spotify, both for free and premium users. The world is currently hyped that the Former First Lady of the United States has released the first episode of her latest podcast. What made listeners even more excited was when she… END_OF_DOCUMENT_TOKEN_TO_BE_REPLACED

Research in Britain has deduced that there are a total of six “general” classifications of COVID-19 symptoms. The research, originally published in June of 2020, has revealed that the symptoms of COVID-19 can be generalized into six different categories. This is based on the data collected from a symptom tracking app. It has been widely proven… END_OF_DOCUMENT_TOKEN_TO_BE_REPLACED