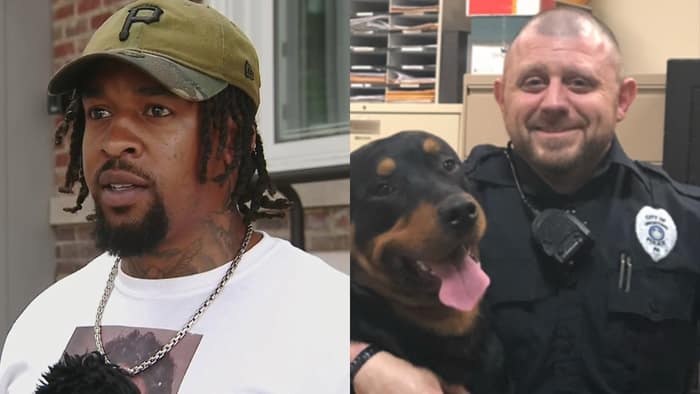 A man who filed a lawsuit against four Pennsylvania State Police troopers for wrongful arrest in 2018 after spending a year in jail associated with a March 2016 brawl outside a bar, recently saved a cop from a burning vehicle.

A loud boom, then the house trembled. Daylan McLee thought it might have been a tiny earthquake until a family member came running inside emphasizing a police cruiser had been involved in a car crash outside the apartment Uniontown apartment. McLee bolted outside and yanked an officer from the mutilated patrol sedan as flames started to spread inside the cabin. Law enforcement officials have commended McLee with saving the cop’s life following the Monday evening crash. McLee said Tuesday, “I don’t know what came across me, but I ripped the door open and just pulled him to safety across the street.”

Thomas Kolencik’s (Uniontown’s Police Lt.) voice cracked as he told reporters at the scene Monday that the department was grateful McLee was adjacent when the crash occurred. Kolencik informed the TV station: “Daylan actually said, ‘I’m not going to let him die. There are just no words to describe, you know.” Several of Officer Hanley’s loved ones had thanked McLee via social media Monday and Tuesday, stressing the officer suffered a serious leg injury and after the crash was undergoing surgery. McLee noted Hanley’s sister actually called to give him thanks, along with a bunch of fellow cops and even the police chief.

In March 2016, McLee had rushed to a Dunbar bar after his sister telephoned him saying she needed to be picked up because she had been drinking and a scuffle broke out. When McLee got there, he disarmed a guy who was posted in the parking lot with a firearm and tossed the gun aside. At least one trooper shot bullets at McLee as he ran off. The officer said McLee pointed a gun at him twice, however, security footage displayed McLee disarming the gunman, discarding the firearm speedily and running when shots were fired.

The Relevance of the Juneteenth Celebrations to the #BLM Protests

Recent trends have reported that K-pop fans in the US are getting mixed in with current issues in politics. K-pop fan communities are using online platforms to rally up and protest against racism in the United States. In support of the #BlackLivesMatter movement, the online K-pop community has come together in protest. Never has it… END_OF_DOCUMENT_TOKEN_TO_BE_REPLACED

Just this week, lawmakers approved a bill establishing the District of Columbia (D.C.) as the 51st state of the United States of America. This is after multiple calls and protests from the citizens to finally consider D.C. as a state.  However, the bill is not out of the woods yet as it faces multiple oppositions… END_OF_DOCUMENT_TOKEN_TO_BE_REPLACED

John Bolton’s new book entitled ‘The Room Where it Happened’ had been stirring up quite the attention since it was announced for release last week. Officially released only June 23, the new book seems to threaten the Trump administration as there had been moves to get it unpublished. The request was later on turned down… END_OF_DOCUMENT_TOKEN_TO_BE_REPLACED