Russian meteor memes abound as America woke to news of unexpected incident, and Twitter and the social web reacted to the bizarre event with tweets, funny pics and link shares as news circulated.

Russian meteor memes circulated after the Russian meteor injured hundreds, but no one was killed in the surprise incident. The relatively mild result enabled the microblogging site to freely crack jokes, share humorous images and discuss the rare event.

As Twitter reacts to the Russian meteor with memes, several of the most retweeted sentiments were as follows:

That Russian meteor footage is a nice reminder that we’re flying through the universe in an organic spaceship with no roof.

RT @setiinstitute: SETI Research F. Marchis’ thoughts on the #RussianMeteor the next step to avoid a future disaster bit.ly/VlEyEf

Updating with all the video of the Russian meteor impacts from this morning. Most complete video roundup right now. gizmodo.com/5984476/meteor…

Showed @monkatz a video of the Russian meteor and then of the screaming goats. She thought the goats were reacting to the meteor. 4 real.

Users also shared Russian meteor compilation videos, due to the prevalence of “dash cams,” and this extensive footage of the event in Russia:

And Russian meteor memes were born: 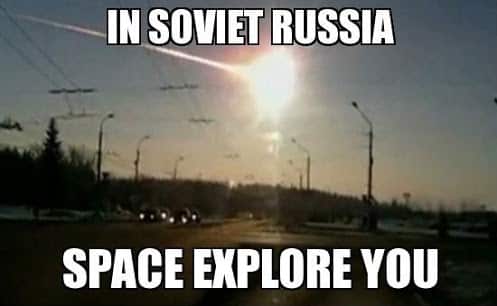