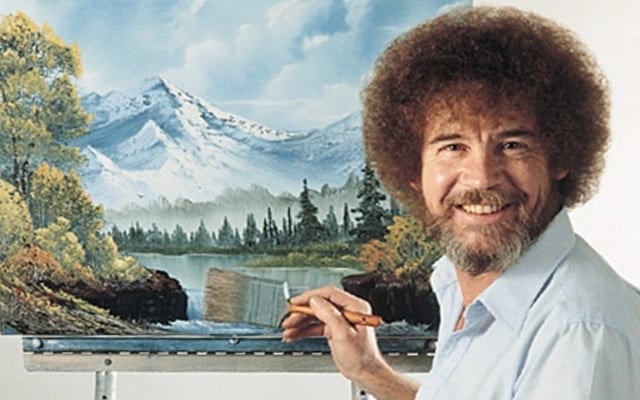 Make some coffee, pour a cup, prep your canvas, and grab your paints, — for Bob Ross now has his own digital channel.

Bob Ross Inc. has partnered with Cinedigm to launch a channel boasting the late art instructor’s vintage PBS show The Joy of Painting. On Samsung The Bob Ross Channel is currently live and extends to Roku on May 18, followed by a rollout on VOD devices globally in the next several months. The newfound Bob Ross Channel will highlight the series’ eventful paintings and moments, featuring about 380 throwback episodes.

For 31 seasons, art instructor, TV host, and painter with the outright distinctive hair Bob Ross garnered viewers around the planet with his televised exhibitions. The Joy of Painting initially launched on United States public TV stations, broadcasting from 1983-94. The showed featured Ross illustrating his “wet on wet” method, which removes the need for each coating of paint to dry. In real-time, the talent produces serene natural scenes including snow-covered forests, tranquil lakes, cascading waterfalls, distant mountain summits, and his trademark “happy” clouds.

Erick Opeka, President of Cinedigm Digital Networks expressed: “Bob Ross has emerged as a major pop culture icon in recent years, and The Joy of Painting has, arguably, never been more popular as a result. With this channel, viewers can easily access Ross’ classic episodes in one convenient place — allowing loyal fans to relive his most memorable moments while introducing Ross and his groundbreaking series to a whole new generation of art enthusiasts.” Ross died of lymphoma in 1995 at age 52.

How did he die? An African American man, George Floyd, 46, was killed by Minneapolis Police officers. Floyd was being investigated for forgery. George Floyd’s death was caused by a police officer holding him down on the ground with a knee on his neck. He was not shot to death but instead strangulated. Now, his family… END_OF_DOCUMENT_TOKEN_TO_BE_REPLACED

The Blood Test, The Swab Test, and The Saliva Test      Essentially, there are three general types of COVID-19 testing produced so far. One is the rapid test, the second is the saliva test and the other is the swab test. The rapid test (also known as the anti-body test) uses blood samples. The swab test… END_OF_DOCUMENT_TOKEN_TO_BE_REPLACED

The COVID-19 pandemic is one of the biggest modern pandemics known in history. Currently, there are more than five million confirmed cases in the world, with a total of 333,000 deaths. A total of 1.6 million of these confirmed cases are in the US alone. The world is currently in a race of finding a… END_OF_DOCUMENT_TOKEN_TO_BE_REPLACED

Despite concrete data and research, people’s opinions will always be diverse when it comes to a variety of topics including religion, politics, gender, and more. Denial is a common reaction to many important discussions and serious world events. The COVID-19 pandemic does not differ from any issues and is subject to opinions from critiques all… END_OF_DOCUMENT_TOKEN_TO_BE_REPLACED

Back in January, when the Wuhan, China coronavirus broke out, it didn’t make it to the front page of newspapers, in print or virtual form. Today, January feels like a lifetime away. Like it or not, people around the world have adapted to the new normal – staying at home, frequent hand washing, and social… END_OF_DOCUMENT_TOKEN_TO_BE_REPLACED

Since the beginning of the year 2020, the whole world has been stupefied by the rapid spread of a deadly coronavirus known as COVID-19. World superpowers in the West were unable to prevent the virus from reaching their borders. Because of this fact, the novel coronavirus COVID-19 became a world-wide pandemic no less than three… END_OF_DOCUMENT_TOKEN_TO_BE_REPLACED