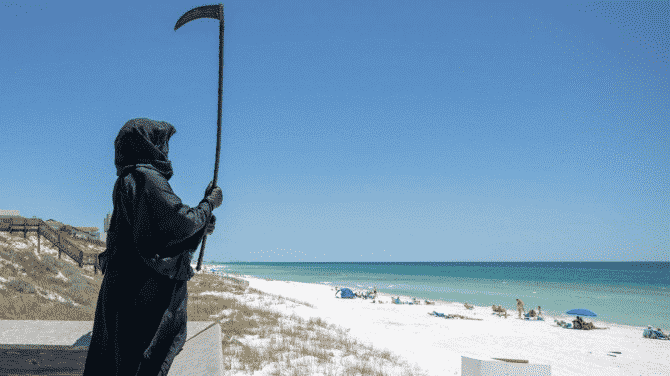 Daniel Uhlfelder, a lawyer in Florida, is donning a Grim Reaper costume and striding beaches to protest the state’s reopening amidst the COVID-19 pandemic.

Florida residents are scurrying to public beaches as the state eases stay-at-home orders, however, one beach-attendee is there not to soak up sun rays but to send a crucial message. As part of efforts to start relaxing measures aimed to slow the circulation of coronavirus, Gov. Ron DeSantis in April reopened a fistful of beaches in the state. Resident Daniel Uhlfelder, though, is alarmed about the reopened beaches and endeavors taking place on the sand.

Many of you have asked if I am willing to travel around Florida wearing Grim Reaper attire to the beaches and other areas of the state opening up prematurely. The answer is absolutely yes. Beginning May 1 we will hit the road here in state. Please retweet and spread the word. pic.twitter.com/UO7QKg161n

Uhfelder, a native of Miami, noted in a tweet that he would begin wandering the beach garbed in the costume starting May 1 to protest the openings. He is concerned that Floridians will drop their guards and hold widespread gatherings that may lead to more COVID-19 victims. “Many of you have asked if I am willing to travel around Florida wearing Grim Reaper attire to the beaches and other areas of the state opening up prematurely,” tweeted Uhfelder. “The answer is absolutely yes.”

Uhlfelder paraded about the beaches, not talking, draping a face mask, to exemplify to the mounds of beachgoers that they should stay home or risk acquiring and spreading the lethal infection, according to reports. “We aren’t at the point now where we have enough testing, enough data, enough preparation for what’s going to be coming to our state from all over the world from this pandemic,” he contended in a recent interview.

While On Beach Mom Discovers Fish With ‘Human Teeth’

How did he die? An African American man, George Floyd, 46, was killed by Minneapolis Police officers. Floyd was being investigated for forgery. George Floyd’s death was caused by a police officer holding him down on the ground with a knee on his neck. He was not shot to death but instead strangulated. Now, his family… END_OF_DOCUMENT_TOKEN_TO_BE_REPLACED

The Blood Test, The Swab Test, and The Saliva Test      Essentially, there are three general types of COVID-19 testing produced so far. One is the rapid test, the second is the saliva test and the other is the swab test. The rapid test (also known as the anti-body test) uses blood samples. The swab test… END_OF_DOCUMENT_TOKEN_TO_BE_REPLACED

The COVID-19 pandemic is one of the biggest modern pandemics known in history. Currently, there are more than five million confirmed cases in the world, with a total of 333,000 deaths. A total of 1.6 million of these confirmed cases are in the US alone. The world is currently in a race of finding a… END_OF_DOCUMENT_TOKEN_TO_BE_REPLACED

Despite concrete data and research, people’s opinions will always be diverse when it comes to a variety of topics including religion, politics, gender, and more. Denial is a common reaction to many important discussions and serious world events. The COVID-19 pandemic does not differ from any issues and is subject to opinions from critiques all… END_OF_DOCUMENT_TOKEN_TO_BE_REPLACED

Back in January, when the Wuhan, China coronavirus broke out, it didn’t make it to the front page of newspapers, in print or virtual form. Today, January feels like a lifetime away. Like it or not, people around the world have adapted to the new normal – staying at home, frequent hand washing, and social… END_OF_DOCUMENT_TOKEN_TO_BE_REPLACED

Since the beginning of the year 2020, the whole world has been stupefied by the rapid spread of a deadly coronavirus known as COVID-19. World superpowers in the West were unable to prevent the virus from reaching their borders. Because of this fact, the novel coronavirus COVID-19 became a world-wide pandemic no less than three… END_OF_DOCUMENT_TOKEN_TO_BE_REPLACED