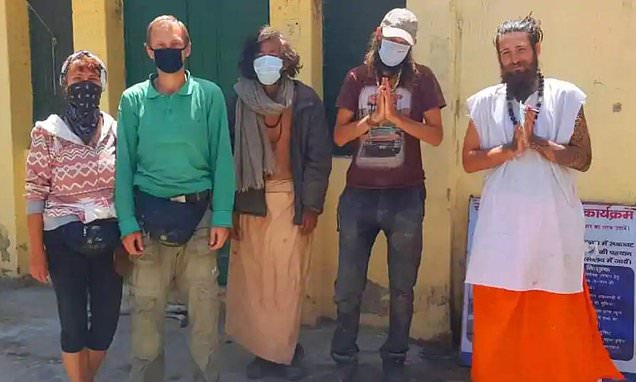 Near a northern Indian town, six foreign tourists self-confined in a cave after they ran out of loot to pay for hotel stays, according to officials.

Police officers said two women and the four men from the United States, Turkey, Ukraine, Nepal, and France had been residing in Uttarakhand inside a cave near Rishikesh for several weeks when law enforcement discovered them on Tuesday, reports say. The bunch of tourists ran out of funds for their hotel last month and relocated to the cave, where they were rationing their cash for supplies and food.

“They had been living in the cave since March 24, the police found them on Sunday and moved them to Swarg Ashram near Rishikesh. We have asked them to self-quarantine for two weeks as a precaution but the group seemed healthy,” Mukesh Chand, a Uttarakhand police spokesperson, told news reporters. India has been on lockdown to curb the circulation of the novel COVID-19 since the end of March. The country has reported 604 deaths from the virus and 18,990 coronavirus cases.

Since March 20, tourists have not been permitted to enter Uttarakhand due to a state order issued a component of the lockdown. Roughly 700 foreign tourists remain in Rishikesh, according to reports. Thanks to The Beatles, Rishikesh has evolved into a tourist hotspot; in 1968, the band visited the area to get away from Beatlemania and plunge into spirituality and meditation with the Maharishi Mahesh Yogi. Today, it deems itself the “yoga capital of the world.”

How did he die? An African American man, George Floyd, 46, was killed by Minneapolis Police officers. Floyd was being investigated for forgery. George Floyd’s death was caused by a police officer holding him down on the ground with a knee on his neck. He was not shot to death but instead strangulated. Now, his family… END_OF_DOCUMENT_TOKEN_TO_BE_REPLACED

The Blood Test, The Swab Test, and The Saliva Test      Essentially, there are three general types of COVID-19 testing produced so far. One is the rapid test, the second is the saliva test and the other is the swab test. The rapid test (also known as the anti-body test) uses blood samples. The swab test… END_OF_DOCUMENT_TOKEN_TO_BE_REPLACED

The COVID-19 pandemic is one of the biggest modern pandemics known in history. Currently, there are more than five million confirmed cases in the world, with a total of 333,000 deaths. A total of 1.6 million of these confirmed cases are in the US alone. The world is currently in a race of finding a… END_OF_DOCUMENT_TOKEN_TO_BE_REPLACED

Despite concrete data and research, people’s opinions will always be diverse when it comes to a variety of topics including religion, politics, gender, and more. Denial is a common reaction to many important discussions and serious world events. The COVID-19 pandemic does not differ from any issues and is subject to opinions from critiques all… END_OF_DOCUMENT_TOKEN_TO_BE_REPLACED

Back in January, when the Wuhan, China coronavirus broke out, it didn’t make it to the front page of newspapers, in print or virtual form. Today, January feels like a lifetime away. Like it or not, people around the world have adapted to the new normal – staying at home, frequent hand washing, and social… END_OF_DOCUMENT_TOKEN_TO_BE_REPLACED

Since the beginning of the year 2020, the whole world has been stupefied by the rapid spread of a deadly coronavirus known as COVID-19. World superpowers in the West were unable to prevent the virus from reaching their borders. Because of this fact, the novel coronavirus COVID-19 became a world-wide pandemic no less than three… END_OF_DOCUMENT_TOKEN_TO_BE_REPLACED