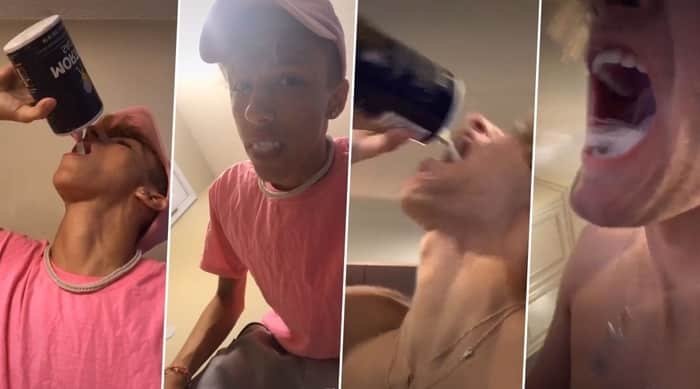 After catching wind of a dangerous TikTok stunt called the “skull breaker challenge” that recently went viral, a user dumped a massive amount of salt into his mouth and began gagging after he spits it out. This loony act has emerged into a trending ‘Salt Challenge’ where teenagers are witnessed pouring salt from the container straight into their mouths.

Landon, a TikTok consumer, published footage of him with a caption, “Someone else try this.” Later, Jonathan, another TikTok user, repeated it, stating, “Salt challenge! This was disgusting.” Despite being aware of the hazards of ingesting salt in a large amount, the distasteful challenge is becoming a popular trend on the video-sharing platform that can trigger various cardiovascular diseases. Dr. Simran Deo, a Zava physician, noted: “As a doctor, I would strongly recommend that people do not participate in this activity. Eating too much salt is very bad for your health both immediately and in the long run.

“In extreme cases, it can also lead to seizures, a coma or can even be fatal – as the high levels of sodium cause the brain to swell up against the inside of the skull. If you think someone has swallowed too much salt, encourage them to drink water. Call the emergency services if they stop breathing, have a seizure or lose consciousness. In the long term, eating too much salt in your day to day life impacts your blood pressure. This is because it makes your body retain too much water, and the strain of pumping the additional liquid around your body makes your heart work harder. And as well as the strain on your heart, eating too much salt can lead to cardiovascular diseases such as heart attack and stroke, high blood pressure, headaches, kidney stones, and kidney disease. UK guidelines recommend limiting your salt intake to around one teaspoon a day – but lots of foods are high in salt, so it’s worth checking the labels on things like bread, crisps, pasta sauce, sausages, and breakfast cereals, and swapping to lower salt options, where possible.”

New Internet Challenge Has People Putting Cockroaches On Their Faces

The world is currently crippled by a global health pandemic. However, more and more catastrophes seem to be continuously tormenting the world. Threats of a recession, unemployment, and illness do not seem to be enough punishment for mankind. Explosions, threats of war, and accidents are happening. What is worse is that there are natural calamities… END_OF_DOCUMENT_TOKEN_TO_BE_REPLACED

The Michelle Obama Podcast was released on the 29th of July and can be streamed on Spotify, both for free and premium users. The world is currently hyped that the Former First Lady of the United States has released the first episode of her latest podcast. What made listeners even more excited was when she… END_OF_DOCUMENT_TOKEN_TO_BE_REPLACED