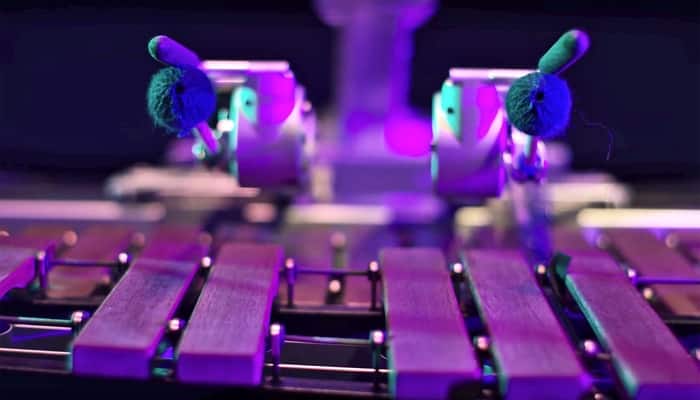 Shimon the robot has learned to dance, sing, compose his own melodies and write lyrics. Better still, he’s set to go on tour to promote his first LP.

Shimon hones his craft the same way alike generative robots do – by being spoon-fed massive amounts of data from existent human exemplars. In this instance, that meant 50,000 lyrics from hip-hop, prog-rock and jazz music. With that foundation arranged, Shimon can then start compiling his own lyrics from the instructions he’s learned. “There are lots of systems that use deep learning, but lyrics are different,” Richard Savery, a specialist on the team, explained.

“The way semantic meaning moves through lyrics is different. Also, rhyme and rhythm are obviously super important for lyrics, but that isn’t as present in other text generators. So, we use deep learning to generate lyrics, but it’s also combined with semantic knowledge.” Shimon’s inventor, Gil Weinberg (a professor at Georgia Tech), starts off by providing the bot a theme, like outer space, and he will then compose lyrics premised on that theme. “You’ll get a word like ‘storm,’ and then it’ll generate a whole bunch of related words, like ‘rain’,” states Savery.

“It creates a loop of generating lots of material, deciding what’s good, and then generating more based on that.” The team notes that Shimon and the band have an LP dropping in the next few months, consisting of nine to 10 songs. Following, there’s a planned tour. “I think we have reached a level where I expect the audience to just enjoy the music for music’s sake,” Weinberg says. “This is music that humans, by themselves, wouldn’t have written. I want the audience to think, ‘There’s something unique about this song, and I want to go back and listen to it, even if I don’t look at the robot’.”

Robot Pole Dancers Set To Debut At Nightclub In France

Need Or Want Help Eating? Well, Train Your Robot To Feed You

The Michelle Obama Podcast was released on the 29th of July and can be streamed on Spotify, both for free and premium users. The world is currently hyped that the Former First Lady of the United States has released the first episode of her latest podcast. What made listeners even more excited was when she… END_OF_DOCUMENT_TOKEN_TO_BE_REPLACED

Research in Britain has deduced that there are a total of six “general” classifications of COVID-19 symptoms. The research, originally published in June of 2020, has revealed that the symptoms of COVID-19 can be generalized into six different categories. This is based on the data collected from a symptom tracking app. It has been widely proven… END_OF_DOCUMENT_TOKEN_TO_BE_REPLACED