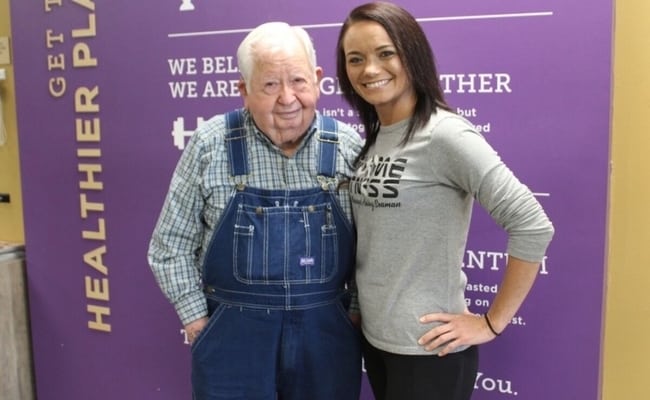 Lloyd Black, 91, joined a gym last year because he figured exercise might help him boost strength and reduce pains and aches.

Once he began working out at Anytime Fitness in Semmes, Alabama, Black’s commitment was an inspiration to the entire gym. Last month, they gifted Black the ‘member of the month award.’ “He’s been showing so much progress and over the past year he’s been coming faithfully three times a week or if not more like every other day,” Ashley Seaman, GM of Semmes’s Anytime Fitness, who nominated the senior citizen, told reporters. “We were going into a new decade and I wanted it to be a special member of the month this time. So I felt like he would be the perfect one.”’

Additionally, his exercise gear really grabs folk’s attention. The 91-year-old dons work coveralls in the summer and overalls in the winter. “The reason I wear them is very simple: I don’t have much hips,” Black quipped to local news. “If I get too active, I have trouble keeping my pants up.” He claimed the jumpsuits possess another advantage. “They are very comfortable and warm.”

When Black initially began exercising he was unable to walk on a treadmill for too long before he became fatigued. Over the last year, Black went from breathing heavy after 10 minutes to seamlessly walking for a half-hour and he found a path around the treadmill’s daunting technology: Black requests Seaman to get the machine to “run and I jump on it.” As his cardiovascular aptitudes have enhanced, Black started weight-lifting, as well. He does upper arm machines and performs leg presses. While it took a little assistance and a lot of practice, the elderly exerciser now assists other members.

Guy Cancels his Gym Membership, Gets an Epic Response

Recent trends have reported that K-pop fans in the US are getting mixed in with current issues in politics. K-pop fan communities are using online platforms to rally up and protest against racism in the United States. In support of the #BlackLivesMatter movement, the online K-pop community has come together in protest. Never has it… END_OF_DOCUMENT_TOKEN_TO_BE_REPLACED

Just this week, lawmakers approved a bill establishing the District of Columbia (D.C.) as the 51st state of the United States of America. This is after multiple calls and protests from the citizens to finally consider D.C. as a state.  However, the bill is not out of the woods yet as it faces multiple oppositions… END_OF_DOCUMENT_TOKEN_TO_BE_REPLACED