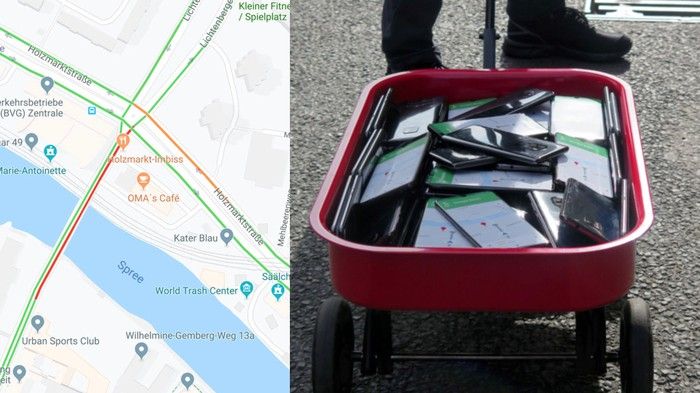 Simon Weckert walked the streets pulling a red wagon behind him. Wherever he roamed, Google Maps displayed a congested traffic jam.

Persons utilizing Google Maps would see a dense red line indicating over-crowding on the road, even when no traffic was there at all. Every single one of the 99 cellphones had the Google Maps app open, giving the virtual delusion that the streets were jam-packed. “By transporting the smartphones in the street I’m able to generate virtual traffic which will navigate cars on another route,” Weckert said in a DM on Twitter. “Ironically that can generate a real traffic jam somewhere else in the city.”

Weckert explained that he did the art/hack induction to get people to ponder about the everyday data we rely on and the headroom we give to cars. “Isn’t it crazy [how] much space is used by a car in a city compared to the usage?” Weckert stated. “The hack shows us what is possible with this technology and who we rely on.” To pull off the feat, he rented 99 smartphones, each of them Android devices, and bought 99 sims cards online for them.

He said he’d spend 60-120 minutes on each spot, strolling back and forth on the street to create a traffic jam. “My subjective feeling was that even this short time was already enough to change the traffic in the street,” Weckert expressed. “‘The map is not the territory … but another version of reality. Data is always translated to what they might be presented. The images, lists, graphs, and maps that represent those data are all interpretations, and there is no such thing as neutral data. Data is always collected for a specific purpose, by a combination of people, technology, money, commerce, and government.”

Gift-giving isn’t just a seasonal affair between friends, families and acquaintances. The art of gift-giving is also conducted on a national scale with countries often sending each other big, weird and expensive gifts. Experts in all things gifts, Vanilla Reindeer put together some examples of these expensive and odd gifts that have been shared between… END_OF_DOCUMENT_TOKEN_TO_BE_REPLACED

There are lots of ways you can make Pres. Trump feel welcome: you can offer him coffee, or mow a penis into a field for him to view as his plane lands. The willie in question has been chopped by Born Eco ahead of the arrival of President Trump, who visited the UK Monday for… END_OF_DOCUMENT_TOKEN_TO_BE_REPLACED

The year isn’t even halfway over, yet Donald Trump has managed to make a fool of himself and our country countless times. From inviting the national college football champions, the Clemson Tigers, all the way to the White House for some McDonald’s to his to the dreaded results of Mueller’s investigation, it has been one… END_OF_DOCUMENT_TOKEN_TO_BE_REPLACED

Republicans have always said that when they gained control in Congress, they would work to overturn Roe v. Wade and here they are, cashing in on that promise one state at a time. So far, Alabama, Arkansas, Georgia, Kentucky, Missouri, and Ohio have all passed incredibly restrictive laws on abortions, making it illegal for women… END_OF_DOCUMENT_TOKEN_TO_BE_REPLACED

If you’re on Snapchat, then you’ve probably played around with (and were likely horrified by) their filter gender swap filters. While you’re probably using these filters to send hilarious pics to your friends, some guys using them to create Tinder profiles. What likely started out as a joke has quickly evolved, and these guys are… END_OF_DOCUMENT_TOKEN_TO_BE_REPLACED

“Milkshaking” is a hilarious trend in Britain where a milkshake is thrown at and ideally lands on a far-right politician or activist. The point of this nonviolence protest is to humiliate them without causing injury. Physical injury at least. There’s no doubt that milkshaking has led to a few bruised egos. Not only is this… END_OF_DOCUMENT_TOKEN_TO_BE_REPLACED