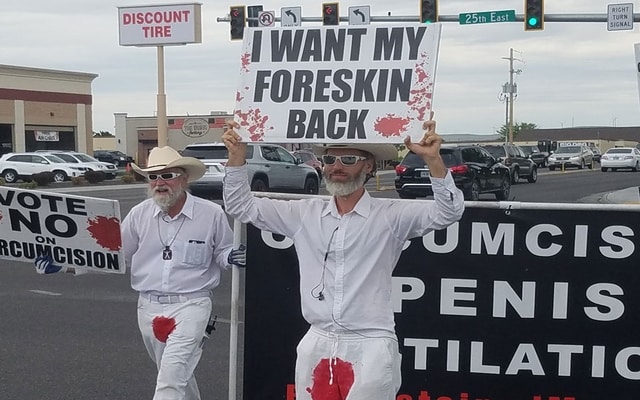 Activists donning clothes with red ‘blood’ splotches in the groin area protested they want their foreskin back at an intersection in Florida, according to reports.

The Bloodstained Men rallied with signs that said “Circumcision is sexual mutilation” and “I want my foreskin back,” amongst others. Images of the protesters were posted to a famed Facebook group for residents in Bradenton, where they drew hundreds of comments from folks both against and for the medical procedure normally performed on baby boys. The layover in Bradenton was merely one of several events slated throughout the state in the upcoming weeks, including one in Orlando on Feb 6th at the University of Central Florida.

According to local reporters, the group protests for a male’s right to choose whether he has his foreskin excised or not. “It should be your choice how much of your penis you get to keep. Nobody should be tampering with the genitals of children,” a spokesperson for Bloodstained Men spoke to newspapers.

Analysis from the Centers for Disease Control and Prevention suggests that circumcision can lessen the probability of sexually transmitted infections and various health difficulties. The World Health Organization concludes that roughly 80% of men in America are circumcised as opposed to 21% in the United Kingdom, and 32% in Canada.

Physicians claim circumcision can reduce the risk of developing urinary tract infections and penile cancer. Dr. George Van Buren, an MCR Health pediatrician, pointed out in an interview that the American Academy of Pediatrics likes for parents to make an election on whether their baby partakes in the procedure.

Gift-giving isn’t just a seasonal affair between friends, families and acquaintances. The art of gift-giving is also conducted on a national scale with countries often sending each other big, weird and expensive gifts. Experts in all things gifts, Vanilla Reindeer put together some examples of these expensive and odd gifts that have been shared between… END_OF_DOCUMENT_TOKEN_TO_BE_REPLACED

There are lots of ways you can make Pres. Trump feel welcome: you can offer him coffee, or mow a penis into a field for him to view as his plane lands. The willie in question has been chopped by Born Eco ahead of the arrival of President Trump, who visited the UK Monday for… END_OF_DOCUMENT_TOKEN_TO_BE_REPLACED

The year isn’t even halfway over, yet Donald Trump has managed to make a fool of himself and our country countless times. From inviting the national college football champions, the Clemson Tigers, all the way to the White House for some McDonald’s to his to the dreaded results of Mueller’s investigation, it has been one… END_OF_DOCUMENT_TOKEN_TO_BE_REPLACED

Republicans have always said that when they gained control in Congress, they would work to overturn Roe v. Wade and here they are, cashing in on that promise one state at a time. So far, Alabama, Arkansas, Georgia, Kentucky, Missouri, and Ohio have all passed incredibly restrictive laws on abortions, making it illegal for women… END_OF_DOCUMENT_TOKEN_TO_BE_REPLACED

If you’re on Snapchat, then you’ve probably played around with (and were likely horrified by) their filter gender swap filters. While you’re probably using these filters to send hilarious pics to your friends, some guys using them to create Tinder profiles. What likely started out as a joke has quickly evolved, and these guys are… END_OF_DOCUMENT_TOKEN_TO_BE_REPLACED

“Milkshaking” is a hilarious trend in Britain where a milkshake is thrown at and ideally lands on a far-right politician or activist. The point of this nonviolence protest is to humiliate them without causing injury. Physical injury at least. There’s no doubt that milkshaking has led to a few bruised egos. Not only is this… END_OF_DOCUMENT_TOKEN_TO_BE_REPLACED