KillSwitch: This App Will Eliminate Ex-Boyfriends And Ex-Girlfriends From Your...

by James Kosur 10 years ago8 months ago

Do you want to completely eliminate your ex-boyfriend, ex-girlfriend, or ex-spouse from your Facebook Timeline? The new Facebook app KillSwitch makes that elimination a very simple process.

Launching on February 14 (Valentine’s Day), the app works by simply having users agree to its installation and then choosing the person to wipe clean from your Facebook timeline.

To use the app you need to still have your ex-partner as a friend on Facebook. For many users that might mean wiping someone clean just moments before a breakup or immediately following such an event.

Once you choose the target of your cleansing the app searches your timeline and removes every Faceboook post, photo, video and status update you included that former significant other on.

Users can choose to delete all content or simply use manual mode to scrub clean certain posts.

The app is $0.99 and will be available via the Apple App Store and Google Play. The company is even donating part of its proceeds to the American Heart Association of New York.

Just remember that the deletion process can take some time if you have hundreds or even thousands of posts that mention your former significant other.

If you are the type of person who changes their mind at a later time you can retrieve your deleted photos, videos and other information via a secret KillSwitch folder found inside your Facebook account.

The company calls the app an “assertion of independence and a healing mechanism for the KillSwitcher.”

We kick people out of our homes, have them take all of their stuff with them and move on with our lives, so why not clear them out of our own little part of Facebook.

What do you think of KillSwitch and its relationship erasing capabilities? 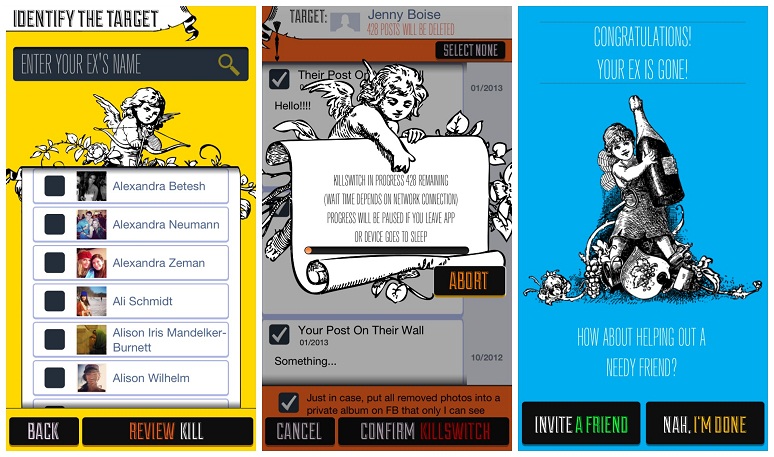