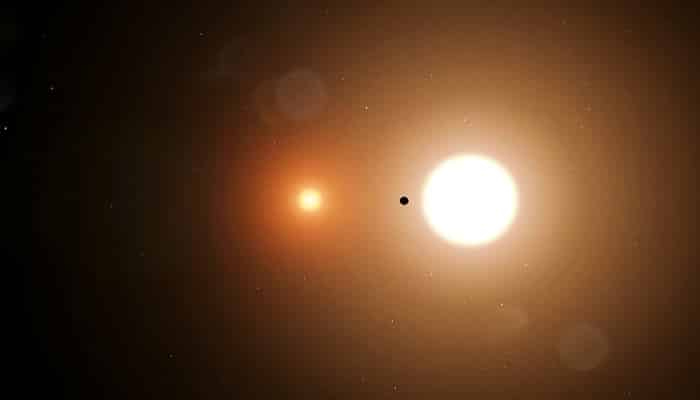 While interning at NASA, a teenager from New York discovered a planet 6.9 times larger than Earth that revolves around two stars.

17-year-old Wolf Cukier, a former intern at NASA’s Goddard Space Flight Center, was entrusted with skimming through data on star luminance from the facility’s continuing TESS or Transiting Exoplanet Survey Satellite mission. The senior at Scarsdale High School was peering at a foreign system situated 1,300 light-years from Earth. He claimed he then observed what seemed to be a mild darkness in one of the system’s stars.

“I had a lot of data in my notes that day about extremities in the binaries,” said Cukier. “But when I saw this one, I put 10 asterisks next to it.” Once he tagged the finding to his research mentors, the teen spent weeks with other scientists and them verifying his hypothesis. NASA stated Cukier’s discovery was a rarity because circumbinary planets are typically difficult to locate and scientists can only observe these planets in the midst of a transit event when one of the suns displays a reduction in brightness.

Cukier noted it was tough attempting to prove his discovery but the statistics kept pointing to a strengthened confirmation. “Our confidence went up and down a couple of times, but by the end of the internship, we were confident that what we found was a planet,” he explained. Cukier’s unveiling and deeper research that he did with other scientists at NASA signified the first time the TESS program found a planet in orbit of two suns.

How did he die? An African American man, George Floyd, 46, was killed by Minneapolis Police officers. Floyd was being investigated for forgery. George Floyd’s death was caused by a police officer holding him down on the ground with a knee on his neck. He was not shot to death but instead strangulated. Now, his family… END_OF_DOCUMENT_TOKEN_TO_BE_REPLACED

The Blood Test, The Swab Test, and The Saliva Test      Essentially, there are three general types of COVID-19 testing produced so far. One is the rapid test, the second is the saliva test and the other is the swab test. The rapid test (also known as the anti-body test) uses blood samples. The swab test… END_OF_DOCUMENT_TOKEN_TO_BE_REPLACED

The COVID-19 pandemic is one of the biggest modern pandemics known in history. Currently, there are more than five million confirmed cases in the world, with a total of 333,000 deaths. A total of 1.6 million of these confirmed cases are in the US alone. The world is currently in a race of finding a… END_OF_DOCUMENT_TOKEN_TO_BE_REPLACED

Despite concrete data and research, people’s opinions will always be diverse when it comes to a variety of topics including religion, politics, gender, and more. Denial is a common reaction to many important discussions and serious world events. The COVID-19 pandemic does not differ from any issues and is subject to opinions from critiques all… END_OF_DOCUMENT_TOKEN_TO_BE_REPLACED

Back in January, when the Wuhan, China coronavirus broke out, it didn’t make it to the front page of newspapers, in print or virtual form. Today, January feels like a lifetime away. Like it or not, people around the world have adapted to the new normal – staying at home, frequent hand washing, and social… END_OF_DOCUMENT_TOKEN_TO_BE_REPLACED

Since the beginning of the year 2020, the whole world has been stupefied by the rapid spread of a deadly coronavirus known as COVID-19. World superpowers in the West were unable to prevent the virus from reaching their borders. Because of this fact, the novel coronavirus COVID-19 became a world-wide pandemic no less than three… END_OF_DOCUMENT_TOKEN_TO_BE_REPLACED