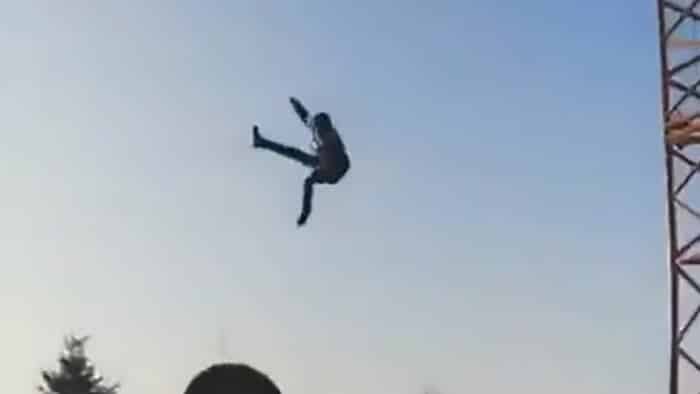 Terrifying footage was nabbed in Kazakhstan of the moment a teenager was sent rocketing through the air by a slingshot ride.

In the clip, a 13-year-old boy can be seen shooting out of the catapult as spectators gasp, before he ultimately lands below on the concrete ground. The accident took place in Almaty at the Kok Tobe recreation area, in the south-east of the country. The teen was hurried to the hospital and is rumored to be fully conscious and in a ‘moderate’ condition in the trauma department; although, he sustained a plethora of severe injuries.

Abai Kusainov, head doctor of the Center for Children’s Emergency Care, informed reporters: “After the examination, our doctors diagnosed the boy with a fracture of four lumbar vertebrae, a fracture of the left radial bone with an offset, fractures of both ankles and of the left lower leg, a fracture of the talus of the left foot with a displacement. The same day he was hospitalized the child was provided with the full assistance needed.” Accordant to the local police department, the adolescent slipped off the slingshot ‘by his negligence and his parents have no complaints against the park administration’.

In 2019, a UK woman claimed her life was ‘ruined’ after she was almost paralyzed in Egypt on a surf simulator. Tracy Turner said: “People need to realize these water parks are dangerous. I was lucky not to be in a wheelchair but the next person might not be. My life has changed forever and has been ruined by a simple water ride. I never knew they were that dangerous. I was a real outdoors person and had a great social life – now I can’t do anywhere near as much as I used to. I have also piled on the weight as I can’t go to the gym and am depressed.”

How did he die? An African American man, George Floyd, 46, was killed by Minneapolis Police officers. Floyd was being investigated for forgery. George Floyd’s death was caused by a police officer holding him down on the ground with a knee on his neck. He was not shot to death but instead strangulated. Now, his family… END_OF_DOCUMENT_TOKEN_TO_BE_REPLACED

The Blood Test, The Swab Test, and The Saliva Test      Essentially, there are three general types of COVID-19 testing produced so far. One is the rapid test, the second is the saliva test and the other is the swab test. The rapid test (also known as the anti-body test) uses blood samples. The swab test… END_OF_DOCUMENT_TOKEN_TO_BE_REPLACED

The COVID-19 pandemic is one of the biggest modern pandemics known in history. Currently, there are more than five million confirmed cases in the world, with a total of 333,000 deaths. A total of 1.6 million of these confirmed cases are in the US alone. The world is currently in a race of finding a… END_OF_DOCUMENT_TOKEN_TO_BE_REPLACED

Despite concrete data and research, people’s opinions will always be diverse when it comes to a variety of topics including religion, politics, gender, and more. Denial is a common reaction to many important discussions and serious world events. The COVID-19 pandemic does not differ from any issues and is subject to opinions from critiques all… END_OF_DOCUMENT_TOKEN_TO_BE_REPLACED

Back in January, when the Wuhan, China coronavirus broke out, it didn’t make it to the front page of newspapers, in print or virtual form. Today, January feels like a lifetime away. Like it or not, people around the world have adapted to the new normal – staying at home, frequent hand washing, and social… END_OF_DOCUMENT_TOKEN_TO_BE_REPLACED

Since the beginning of the year 2020, the whole world has been stupefied by the rapid spread of a deadly coronavirus known as COVID-19. World superpowers in the West were unable to prevent the virus from reaching their borders. Because of this fact, the novel coronavirus COVID-19 became a world-wide pandemic no less than three… END_OF_DOCUMENT_TOKEN_TO_BE_REPLACED