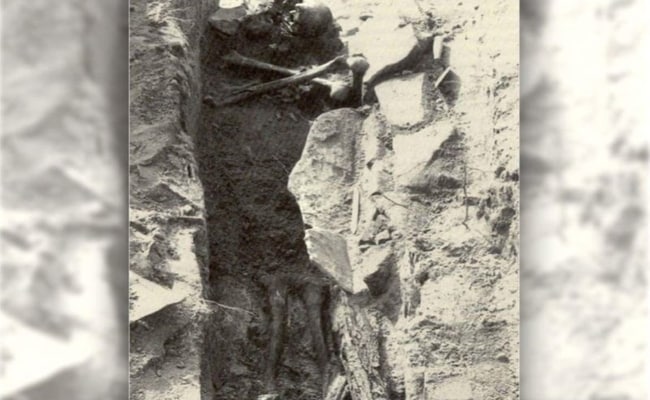 Remains in a Connecticut grave arranged in a manner to forestall the ‘vampire’ from ‘rising and feeding,’ has been identified as laborer John Barber.

Back in 1990, kids in Griswold, Connecticut playing near a gravel pit stumbled upon a pair of skulls that were unearthed from graves in an unmarked cemetery from the 19th century. Subsequent excavation unconcealed 27 graves—notably that of a man identified by the mere initials “JB55” (John Barber, 55 years old), scribed out in brass tacks on his casket. Different from the other burials, JB’s femurs and skull were neatly organized in the form of a skull and crossbones, having archaeologists conclude that Barber by his community had been a suspected “vampire.”

His remains displayed hints of lesions on the ribs, thereby Barber possessed a chronic lung condition—tuberculosis most likely, known during that period as consumption. In the 1800s it was often lethal, because of antibiotics nonexistence, and symptoms consisted of jaundice (pale, yellowed skin), bloody cough, swollen and red eyes, and a general look of “wasting away.” The infection spread commonly to family members. So it’s not shocking that local folklore alleged victims of being potential vampires, rising up from the grave to ail the community they departed from.

Given Barber’s lung illness and the fact that there were indications of decapitation, he was likely a presumed vampire. “This was being done out of fear and out of love,” Nicholas F. Bellantoni, a retired archaeologist from Connecticut who in the early 1990s worked on the case, told local news reporters. “People were dying in their families, and they had no way of stopping it, and just maybe this was what could stop the deaths. They didn’t want to do this, but they wanted to protect those that were still living.”

Woman in Ukrainian Grave Was Buried Alive with Her Dead Husband

Gift-giving isn’t just a seasonal affair between friends, families and acquaintances. The art of gift-giving is also conducted on a national scale with countries often sending each other big, weird and expensive gifts. Experts in all things gifts, Vanilla Reindeer put together some examples of these expensive and odd gifts that have been shared between… END_OF_DOCUMENT_TOKEN_TO_BE_REPLACED

There are lots of ways you can make Pres. Trump feel welcome: you can offer him coffee, or mow a penis into a field for him to view as his plane lands. The willie in question has been chopped by Born Eco ahead of the arrival of President Trump, who visited the UK Monday for… END_OF_DOCUMENT_TOKEN_TO_BE_REPLACED

The year isn’t even halfway over, yet Donald Trump has managed to make a fool of himself and our country countless times. From inviting the national college football champions, the Clemson Tigers, all the way to the White House for some McDonald’s to his to the dreaded results of Mueller’s investigation, it has been one… END_OF_DOCUMENT_TOKEN_TO_BE_REPLACED

Republicans have always said that when they gained control in Congress, they would work to overturn Roe v. Wade and here they are, cashing in on that promise one state at a time. So far, Alabama, Arkansas, Georgia, Kentucky, Missouri, and Ohio have all passed incredibly restrictive laws on abortions, making it illegal for women… END_OF_DOCUMENT_TOKEN_TO_BE_REPLACED

If you’re on Snapchat, then you’ve probably played around with (and were likely horrified by) their filter gender swap filters. While you’re probably using these filters to send hilarious pics to your friends, some guys using them to create Tinder profiles. What likely started out as a joke has quickly evolved, and these guys are… END_OF_DOCUMENT_TOKEN_TO_BE_REPLACED

“Milkshaking” is a hilarious trend in Britain where a milkshake is thrown at and ideally lands on a far-right politician or activist. The point of this nonviolence protest is to humiliate them without causing injury. Physical injury at least. There’s no doubt that milkshaking has led to a few bruised egos. Not only is this… END_OF_DOCUMENT_TOKEN_TO_BE_REPLACED